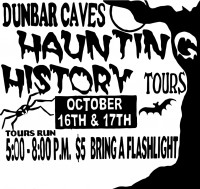 Once again Haunting History was a great success. Haunting History just finished its tenth year of performing skits inside the cave and bringing the public in to see them. The dreariness of Friday’s weather did not stop 205 people from coming to go into the cave. Saturday brought 341 people. We had the event earlier in the month than usual because studies by APSU show that the Dunbar Cave bats begin their hibernation right on/around October 31. Two weeks earlier is a safer time to be making noise in the cave.

Swan Lake Golf Course allowed us to use their parking lot for overflow parking.

Over 40 volunteers poured and stirred complimentary cups of hot chocolate, put up and took down the tiki torches that lined the lake, sold glow necklaces and tickets, took us into the cave to see the skits and manned the parking lot. The volunteers were a happy bunch, their enthusiasm catchy.

Haunting History is a fundraiser by the non-profit group, Friends of Dunbar Cave. Monies raised are used to help preserve and protect the park and educate the public.

The 40+ Haunting History volunteers were an impressive bunch. They came willing to do whatever was needed and also to have a good time. They did both. This event has side benefits, like making everyone fall in love with the cave and the Friends of Dunbar Cave group. Several people became members during the event.

I received a lot of positive feedback about the skits from the public and the volunteers. I was thrilled to overhear a man quote the first skit about bats to his wife and talk about how many mosquitoes bats eat. They both agreed that they should build a bat house to try and attract bats to their property.

The first skit was meant to dispel fears about bats and replace them with true information. At the end of the skit the actors showed the audience that a live bat was hanging on the ceiling. It was with excitement and awe that people looked at it, not with horror and fear.

The second skit, Haunting Memories, was created from what certain people had to say about the good ole days at Dunbar Cave. Woman 1 represents Marguerite Rubel and Mary McDaniel. Woman 2 is Rachel Tate and Jacquie Miles. Man 1 is Jimmy Dunn and Ronnie Hunter. Man 2 is Zoot Parker who was known as the best dancer in Clarksville. While talking to the actors I was able to fill them in on who they were representing.

Skit three, Haunting Questions, is about the Native Americans who made the art on the walls in Dunbar Cave. Information about the topic was gathered on visits to Indian Mound sites, like Pinson Mounds in West Tennessee and from books purchased there.

Many people come out of the event smiling and saying, “Wow, I learned a lot!” They seemed pleasantly surprised by that, maybe because they were older by far than the children doing the skits.

The Roxy actors were great. I watched them rehearse and was totally impressed. Then, of course, they just kept getting better. A week before the event we took them and the director into the cave to see how the “stages” looked. After that we were treated to a bit of a tour by Michael Fulbright who works at the Park. The kids were thrilled and learned a lot about the cave.

The Friends of Dunbar Cave wish to give special thanks to these sponsors:

Volunteers who helped on this event

We wish to give a special thanks to the Dunbar Cave Park Staff! Amy Wallace, Adam Neblett, Robert Wells, Teresa Campbell, Michael Fulbright and Blaine Hargis