APSU Student wins big on “The Price is Right”

She appeared on the show as a contestant in July, during a visit to California with her family, but then three months passed before it finally aired this week on national television. A person can forget a lot in three months.

“I don’t remember half the stuff I did,” she admitted. 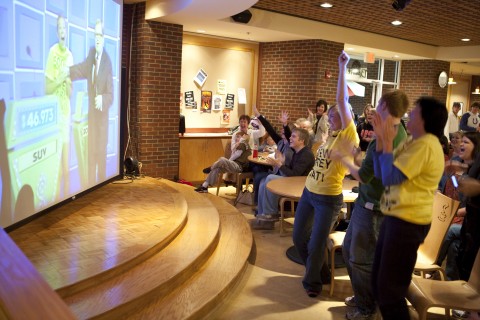 Kayla Mikel, an APSU nursing student, reacts with the crowd Tuesday morning as she wins big on the television game show “The Price is Right.” (Photo By Rollow Welch/APSU Public Relations and Marketing)

To jog her memory, Mikel and about 40 of her friends and family crowded around a big projection screen television on Tuesday morning at Einstein Bros Bagels, inside the APSU Morgan University Center, to watch the show.

And there she was on the television, dancing with Drew Carey. She also did some jumping and screaming and, more than a few times, she threw her hands in the air. But who could blame her? The 20-year-old had just won the show’s grand prize, The Showcase Showdown. Her low bid of $37,000 for a prize package worth $45,000 was enough to name her the show’s winner and earn her a Lexus SUV, an outdoor play gym and a trip to Disney World. She also previously won a surfboard and a snowboard in the opening round of the show.

Mikel, however, had to wait until after this episode aired to claim her prizes, and not everything she won is coming home with her.

“The trip to Disneyworld and the surfboard and snowboard, I forfeited that because of taxes,” she said. “So I only kept the Lexus, and the play set, they gave me cash for. It’ll be like $2,700 in cash. I only kept the cash and the car.”

“All the excitement has rushed back,” she said. “I kind of felt like I was there again.”

Her mood that morning was infectious. Other patrons inside the coffee shop who didn’t know Mikel stopped to watch and applauded her success. Even the Chartwell’s staff, the University’s dining services contractor, had a mini wheel fashioned after the one on the show that customers could spin. The wheel told them how much of a discount they received off their order, with the top prize being a free meal.

Tuesday’s airing came as a big sigh of relief for Mikel. For the last four months, she was legally obligated to not say a word about how well she did. Her friends and professors around campus knew she made it on the show, but not that she was the big winner.

“I’ve been counting down the days,” she said. “On Facebook, I’ve been putting, seven more days until ‘The Price is Right.’”

Once the show ended Tuesday, with everyone inside Einstein’s applauding and cheering, Mikel seemed unable to stop smiling.

“I was afraid of what I was going to look like, but it wasn’t that bad,” she said.