Austin Peay will seek its fifth straight victory by playing host to Marian University in a 7 p.m., Saturday contest in Dave Aaron Arena.

The Govs are coming off an impressive 68-66 road victory, Wednesday night, at Ohio. The Govs, now 6-4 on the season, overcame a 13-point second-half deficit to down a young, but talented Bobcats team.

Wesley Channels, who had just five points at halftime, finished with a game-high 22 points, including four second-half three pointers. 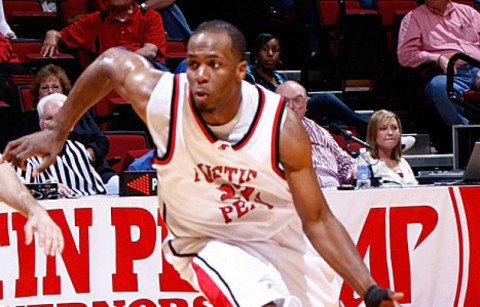 John Fraley, meanwhile, knocked down a pair of free throws with 0.8 seconds left to lift the Govs to the verdict. He finished with 12 points and was perfect from the free-throw line (4-4), making him 11 of his last 12 from the line.

Meanwhile, Anthony Campbell overcame a nightmarish first half (two points, five turnovers), to also end with 12 points, including 5-of-6 at the free-throw line.

The victory was APSU coach Dave Loos’ 320th victory, making him the Ohio Valley Conference’s winningest coach, passing Cal Luther, who coached at both Murray State and UT Martin during his career.

Marian (Ind.), meanwhile, has a legendary coach itself. John Grimes is in his 34th season as the Knights coach and just last season he achieved his 500th career victory.

Marian (Ind.) comes to town olding a 4-5 record in the early going. However, the Knights have struggled of late, losing two straight and four of the last five contests. Guard Jordan Tucker leads the way, averaging 16.2 ppg, while fellow guard Alex Sylvester is at 15.6 ppg.