OXFORD, Miss. – Austin Peay State University’s baseball team fell into an early hole and was unable to recover, falling to No. 17 Mississippi, 10-2, Wednesday at Oxford-University Stadium.

Austin Peay (8-5) starter Stephen Huff got into trouble in the first inning, walking the first three batters he faced. He recovered to strikeout the Rebels next two batters looking and nearly worked his way out of the jam. But Mississippi third baseman Mike Snyder and first baseman Matt Smith each hit two-run singles before Huff was able to escape with the Rebels leading, 4-0. 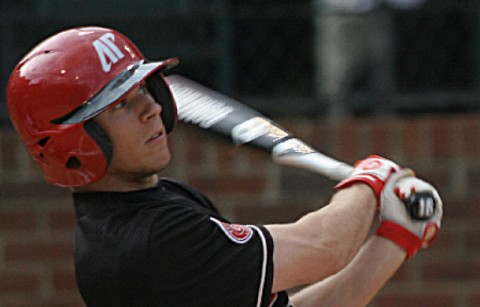 Mississippi (11-2) starter Matt Crouse did not allow a run through the first three innings though Austin Peay did have its opportunities, leading four men on base. The Govs broke through with a run in the fourth as left fielder Adam Browett singled to start the inning. Two outs later, second baseman Chris Lewellyn hit a run-scoring double and chasing Crouse.

Unfortunately, the Rebels added two runs in their half of the fourth and tacked on three more runs in the sixth. The Govs scored their final run on center fielder Michael Blanchard’s first home run this season.

The Govs offense was limited to seven hits, Browett going 2-for-4. Catcher Trey Lucas saw his 15-game hit streak halted by an 0-for-2 outing.

Crouse (2-0) picked up the victory for the Rebels after allowing one run on three hits over his 3.2 innings.

Austin Peay travels to North Carolina for a two-game series against Charlotte, beginning with a 4 p.m., Friday contest.