NASHVILLE – Austin Peay State University’s baseball team fell behind early and could not forge a comeback, falling 5-3 to Belmont in non-conference action at Shelby Park.

Austin Peay (22-18) scored three runs in its half of the first inning to take the early lead. Center fielder Jared DeLong walked with one out and moved to second on designated hitter Matt Kole’s single. Both runners would score on left fielder Adam Browett’s triple off the right center field wall. Browett would himself score courtesy first baseman John Hogan’s sacrifice fly. 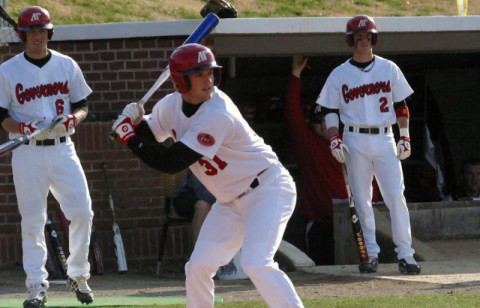 Belmont (19-24) did not allow the Austin Peay lead to stand for long, batting through the order in its half of the first and scoring five times. The first four Bruins batters reached base, first baseman Nate Woods two-run double cutting the lead to 3-2. Right fielder Phillips Parsley, designated hitter Adam Cellini and shortstop Jared Breen also recorded RBI in the frame, giving Belmont a 5-3 advantage. The Bruins added an sixth run in the third on left fielder Mark Noth’s triple.

Both pitching staffs settled in after the early fireworks and put up zeros during the middle part of the contest. Belmont’s pitchers did not allow an Austin Peay runner to reach second base after the first inning until the ninth. Austin Peay’s pitching staff limited Belmont to four base runners over the final five innings.

The offenses recovered to scratch out runs in their final turn at bat. Belmont took advantage of a walk, an error and a wild pitch to scratch out its seventh run in the eighth inning. The Govs used a leadoff walk, a Hogan double and a Lucas groundout to score its fourth run in the ninth.

Belmont starter Tyler Graskewicz (1-2) picked up his season’s first victory after holding the Govs to three runs on four hits over five innings.