OMAHA, NE,  — While the recession forced millions of Americans into the kitchen and to develop an eat-at-home mindset, a new survey(1) released today by ConAgra Foods (NYSE:CAG) one of North America’s leading food makers, shows that despite the ease on economic conditions, Americans are not soon to let go of their new habits. In fact, while many experts say the recession is over, four-in-five Americans (79 percent) say they do not feel like it is and seven-in-10 (71 percent) say they will continue the savings habits they developed during the economic downturn.

The survey shows that the recession continues to impact the way people shop for and prepare food, and even as tough times subside, consumers find their new frugal habits hard to break. In fact, of those who made changes to their food shopping or preparation habits, most of those changes will continue into the coming year. 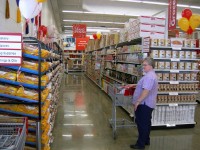 “Consumers are saying loud and clear that the effects of the recession are lingering,” said Phil Lempert, Supermarket Guru, in collaboration with ConAgra Foods. “Over the past 20 months shoppers are heading back to shopping lists and looking for real value. When they are in the store, they are shopping in more locations, especially in the center of the store. Many are turning to canned or prepared products, which can offer both cost savings and convenience for those who are cooking and eating at home more.”

While economics drove many consumers into their kitchens, a newfound love of cooking may keep them there post recession. Half of Americans (52 percent) say they expect to cook more in the coming year than they did last year, and among younger consumers, the trend is even stronger. Seventy-two (72) percent of those ages 18 to 34 say they will cook more.

Seventy-one (71) percent of younger Americans have started cooking new dishes, although 59 percent say they don’t always know what they’re doing and that they’d like to be better cooks. Still, they enjoy cooking more so than the general population – 75 percent compared to 61 percent.

One reason may be that younger consumers believe cooking increases quality family time. Eighty-one (81) percent say cooking is bringing their family together, compared to just 68 percent of the general population.

ConAgra Foods also has a strong business-to-business presence, supplying frozen potato and sweet potato products as well as other vegetable, spice and grain products to a variety of well-known restaurants, foodservice operators and commercial customers. For more information, please visit us at www.conagrafoods.com.

Survey Methodology: This report presents the findings of a telephone survey conducted among a national probability sample of 1,018 adults comprising 509 men and 509 women 18 years of age and older, living in private households in the continental United States. Interviewing for this CARAVAN® Survey was completed during the period March 26-29, 2010. Results have a margin of error of +/-3%.

(1) To delve into the post-recession mentality adopted by so many Americans, ConAgra Foods commissioned a nationwide “Post-Recession Reality” telephone survey of 509 men and 509 women 18 years of age and older fielded by Caravan.