Yonkers, NY — Consumer Reports latest tests of more than 50 laundry detergents continue to show that buying a high-priced laundry detergent doesn’t guarantee cleaner clothes. Formulas from Tide topped Ratings of conventional and high-efficiency formulas, but there are other, less-expensive formulas from manufacturers such as Gain that offer comparable cleaning. The full report, which includes six tips for achieving cleaner clothes and buying advice and Ratings of laundry detergents, is featured in the July issue of Consumer Reports and on www.ConsumerReports.org.

To determine which perform best, Consumer Reports tests all laundry detergents on seven common stains and soils, using a color-sensitive instrument called a colorimeter to analyze how much stain remains after washing.  Both conventional and high-efficiency washing machines are used during the testing procedure and the laundry detergents are used as directed on the container.  All detergents are measured against washing with nothing but water, which provides minimal cleaning. 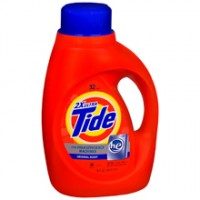 Front-loaders and high-efficiency top-loading washing machines require high-efficiency laundry detergents.  Consumer Reports tested 23 formulas and eight performed well-enough to recommend including formulas from Tide, All, Gain, Up & Up (Target), Kirkland Signature (Costco), and Seventh Generation. Tide 2X Ultra with Color Clean Bleach  Alternative  HE, .24  cents  per  load, topped the Ratings for cleaning best overall and noted for being very good on grass stains. Gain Original Fresh HE which costs .06 cents per load is a CR Best Buy. It was impressive at cleaning, costs far less and was the top pick among powders for its fine performance on grass and bloodstains.  Kirkland Signature Environmentally Friendly Ultra 2X HE (Costco), .12 cents per load, and Seventh Generation Natural Powdered HE, .36 cents per load, are mostly plant-based and cleaned best among detergents with green claims.

Martha Stewart Clean Laundry Detergent finished last-place among laundry detergents in both categories. Like water, it provides minimal cleaning, leaving behind more of the wine, chocolate, grass, ring around the collar, and other common stains and soils in Consumer Reports conventional top-loading washer tests. It cleaned only slight better in front-loaders.

The full report on laundry detergents is featured in the July 2010 issue of Consumer Reports which is available on June 1st wherever magazines are sold and online at www.ConsumerReports.org.