The Unity Day Celebration was something special

Unity is the quality or state of being made one.

[1]That is exactly what happened during the first annual Unity Day Celebration on Saturday night. For at least one evening, our community was made whole. The purpose of Unity Day was to help unite the Clarksville community, it celebrated the accomplishments our community’s leadership, and paid tribute to and recognized the hard work of non-profit organizations in Clarksville, TN; and It more than succeeded in reaching this lofty goal.

The event was the brainchild of Treva Gordon, the Founder and Publisher of the Convenient Shopper an advertising supported bi-monthly magazine. However, during the evenings ceremonies Clarksville Mayor Johnny Piper announced that Unity Day would be officially recognized by the City each year. 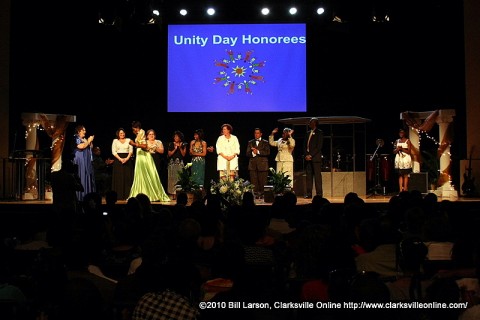 Non-profit organizations being recognized at the 2010 Unity Day Ceremonies

Local Attorney Kevin Kennedy and Yolanda Stewart of F&M Bank were the emcee’s for the evening, and they did an excellent job. After the event Treva Gordon pointed out, “Yolanda & Kevin both did a great job hosting the event”.

During the ceremony the following pastors were recognized for their service to the community:

But the star attraction for the evening had to be Grammy-award-winning Gospel artist Dr. Bobby Jones who was presented with a key to the city, by Mayor Piper earlier in the ceremony.

Jones is credited with taking Gospel Music to mainstream airwaves via cable television. He is the host and executive producer of the Bobby Jones Gospel Hour which is has aired on BET since November 1980, and is one of the network’s most popular shows. Jones, along with the New Life Singing Aggregation and The Nashville Super Choir performs all styles of gospel music and welcomes an array of gospel artists. The Bobby Jones Gospel Radio Show and The Bobby Jones Gospel Countdown, airs on The Sheridan Radio Network, and has become a favorite of Gospel Music lovers from coast to coast.

In March 2006, Dr. Bobby Jones was appointed to a three year term as ambassador at large of Dominica, in the West Indies by Prime Minister Roosevelt Skerrit.

Jones is a native of Henry County, Tennessee.

Among the many VIP guests on hand were Clarksville Mayor Johnny Piper and City Council members Barbara Johnson, Candy Johnson, Marc Harris, and Jeff Burkhart; Jimmy Garland from the Clarksville Tennessee branch of the NAACP; Susan Chapman from Loaves & Fishes, and Pastor Tommy Vallejos from H.O.P.E. and his wife Caroline;  Phil Harpel from Bank of America represented Montgomery County Mayor Carolyn Bowers at the ceremony; and Sheriff Norman  Lewis and his wife Kris.

A special commendation goes out to the Nashville Super Choir for their heavenly musical performances during the evening.