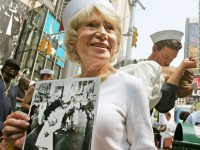 Washington, DC — The family of Edith Shain announced the passing of their dear mother in Los Angeles on Sunday June 20th, 2010 California at the age of 91.

Ms. Shain was a Registered Nurse, kindergarten teacher, public access cable television producer who became a world famous figure following her participation in the 50th Anniversary of V-J Day in August of 1995.

In August of 1945 she was photographed by famed photographer Alfred Eisenstadt while kissing a jubilant U.S. Sailor in Times Square, in celebration of the end of World War II. Her son Michael Shain described the photo as having captured “an epic moment in American history, one that inspired patriotism, unity, joy and a spontaneous national pride in victoriously ending the war.”

When asked why his mother had attracted so much attention in her senior years, her son Dr. Robert Shain explained “she had a wonderful charismatic personality full of love, laughter and caring about other people and in government and politics.”

Edith Shain is also survived by son Justin Decker, who said, “my mom was always willing take on new challenges and caring for the World War II veterans energized her to take another chance to make a difference.” She also leaves behind six grand children and eight great grandchildren.