Khowst Province, Afghanistan – Accidents happen. They happen every day, not only throughout the United States, but also in combat zones.

Statistics show that accidents in Afghanistan and Iraq are responsible for more injuries and deaths than those sustained in combat.

With those kinds of numbers in mind, military police stepped up their efforts to enforce traffic rules and regulations at Forward Operating Base Salerno by conducting a traffic checkpoint July 30th.

“The main mission of the checkpoint is to increase safety on the forward operating base here,” said U.S. Air Force Capt. Randall P. Gernhardt, a native of Pittsburgh, and commanding officer of FOB Salerno’s Provost Marshall Office. “We want to make sure everyone is wearing their seatbelts, their required protective gear, and they are following all traffic regulations.”

According to Gernhardt, this was the first time his unit has conducted a traffic checkpoint on Salerno, and it came about for several reasons.

One of the main factors was the recent increase in traffic related violations and complaints.

“When we first got here violations were minimal,” he said. “Recently there has been an increase in violations, not only in what we’ve observed, but with incoming complaints as well. In order to try and curb some of the common violations and help ensure safe vehicle operations on the forward operating base here, we decided to conduct a checkpoint.”

The checkpoint was set up with two security forces patrolmen running radar, while two stopped vehicles. Once the vehicles were stopped, the drivers were checked for proper identification, license and paperwork. 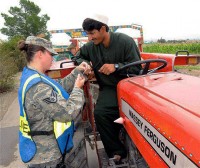 Although military police issued no citations at the checkpoint, the MPs have issued 30 citations in the last 30 days. According to Gernhardt, that number is four-times the amount issued in the last two months.

“We are not here to harass anyone, give anyone a bad day or write a bunch of tickets,” said Gernhardt. “We are here to make sure people operate vehicles in a safe manner and that they get from one point to the other without injuring themselves or others.”

Another key reason for conducting the checkpoint was to increase driver awareness of military police presence on the base.

“One thing the checkpoints do is let people know we are here,” said U.S. Air Force Staff Sgt. Amber N. Perez, a native of Vancouver, WA, and a security forces patrolman with the 655th Air Expeditionary Squadron. “It’s important to increase awareness, so if someone has a problem or an issue, they can come to us for help.”

“We plan on doing these at least once a week,” he said. “As long as we are receiving complaints about speeders and unsafe drivers, we are going to be out there enforcing the law.”

Most drivers don’t want to be stopped or cited by a military policeman, and the team has a few pieces of advice on how to avoid trouble.

“Be vigilant and aware of everyone on the FOB,” said Perez. “We are all trying to accomplish our missions and conduct our business as best as possible.  Being safe helps everyone.”

“Follow the rules and we will all be safe,” he said. “Our main goal is to have everyone return home to their families safe and in one piece. If we can accomplish that, then that’s a good thing for us.”