This is the first time members of the team have fielded the system.

On the hillside several hundred meters away, small plastic bottles filled with water served as targets, virtually indistinguishable from the surrounding terrain by the naked eye.

With pinpoint accuracy, the targets were eliminated in rapid succession by the gunners to the great delight of those on the convoy. 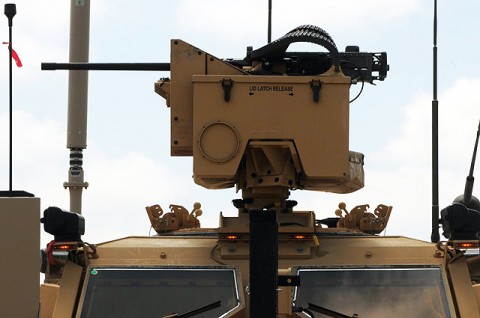 Before, gunners were exposed to the elements and to enemy actions while perched above their mine-resistant ambush protected all terrain vehicles.

“This CROWS system allows the gunner to be inside the vehicle protected by armor, which is great,” said U.S. Army Spc. Aaron Franklin, a native of Greenville, SC, a gunner for the PRT who belongs to the B/1-178th Field Artillery Regiment, South Carolina Army National Guard. “This system eliminates the gunner having to be exposed to small arms fire or other types of attacks. It also helps provide me with much more visibility and accuracy in order to do my job more effectively.”

The CROWS system is seen as a fantastic benefit for the PRT, located at Forward Operating Base Sharana, in southeast Afghanistan.

A highly-technical camera and detection system now occupies the turret once inhabited by the gunner. Inside the Mine Resistant Ambush Protected All Terrain Vehicle, the gunner controls and monitors the system by a sophisticated computer system. 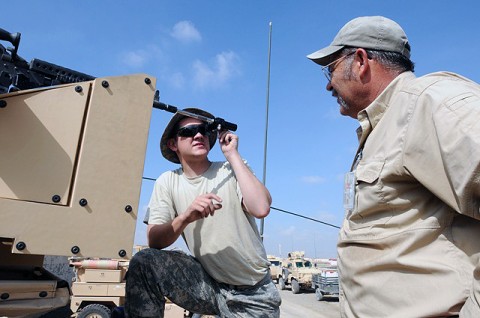 The accuracy of the system allows the gunner to maintain the same sectors of fire as before, only now he has technological advances such as zoom and detection capability that wasn’t available before. In addition, the gunner now patrols his sector of fire behind inches of life-saving armor protection.

“I love putting war fighters out of harm’s way,” said Leroy Obray, a native of Hope, KS who is an instructor and field service representative for Tank Automotive Command, who equips coalition force units with the system. “As a retired soldier myself, saving soldiers’ lives is gratifying work. This system protects soldiers; it gets them out of the turret and out of harm’s way.”

There are other benefits to the system than getting the gunner of the vehicle into a safer location inside the truck, says Obray.

“This system is designed to provide more accuracy when engaging targets due to the zooming technology the system contains,” he said. “In addition, there are certain properties of the system that could assist in IED detection, further protecting the entire convoy from attack.” 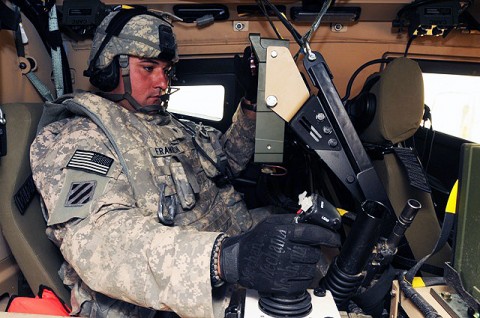 Obray sees great things for the future of the CROWS system.

“This system is something everyone should have on their vehicle,” he said.

“I have heard that the CROWS system will start to be used on a lot more weapon systems and I think they should put one on every type of vehicle to enhance a gunner’s effectiveness. It’s too bad the length of training time limits the amount of people who can learn the system because the entire crew could benefit from knowing this system just in case something ever happened to the gunner.”