After four years, linebacker keys turned over to new pair of defenders

Between them, Daniel Becker (37) and Kit Hartsfield (40) started 77 games at linebacker during their Austin Peay football careers.

That is an awful lot of snaps, discarded blocks and offensive schemes dissected by the two in four seasons. Now the defensive keys have been turned over to another set of young linebackers, a pair of sophomores.

At middle linebacker, Zac Burkhart, the Clarksville native, has taken over for Becker while on the outside it is Darrick Dillard, a Hopkinsville, KY, product, taking over for Hartsfield. 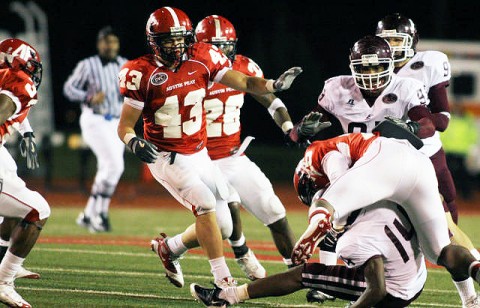 In both cases the two literally have grown into their positions. When Burkhart stepped onto campus three years ago, he weighed in at 199. He used 2008 as a redshirt season, working hard in the weight room and continued that work ever since. He now has packed 231 pounds on his 6-3 frame.

Dillard, meanwhile, came to Austin Peay a year ago as a defensive back, weighing 189 pounds. A year later he now weighs 212 pounds.

“The guys that are starting now are both players,” APSU coach Rick Christophel said. “We have a few guys with actual game experience but we don’t have a lot of starting experience. That is the part we are going to miss-you can’t replace that type of experience. I believe we are going to be a little more athletic at linebacker, but don’t know if we will as savvy. The only way we will know through games.”

Burkhart gained valuable experience behind Becker a year ago and was credited with 17 tackles, including one tackle for loss. He also had the Governors’ first interception of 2009 and then sealed APSU’s upset win against Eastern Kentucky with his season’s second pick.

Middle linebacker, in fact, could be called the “Zack Attack.” Behind Burkhart is another Zac, this one by the name of Zach Lane, another Clarksville product (Clarksville High School), who followed in Burkhart’s footsteps by redshirting a year ago.

“Hopefully, Zac (Burkhart) will continue to be a big-play guy for us,” Christophel said. “But there is a difference between starting and playing 10-15 plays; we have to get Zac game-conditioned to play 25, 30 or even 40 plays a game. Hopefully, Zach Lane can help us at that position to help offset some of those demands. Zach (Lane) has made himself into a physical football player.”

Freshman Josh Owens will back up at the position.

Meanwhile, on the outside, Dillard has enjoyed an outstanding camp, moving ahead of senior Ricky Thomas, who will miss the season opener for a “violation of team policy.”

Dillard came to APSU a year ago as a defensive back. Shortly after reporting-and with lack of depth at wide receiver-he was moved to that position. When receiver Devin Stark finally was certified by the NCAA Clearinghouse, Dillard returned to defense, this time as a linebacker. Linebacker runs in his family. His brother, Miguel Merritt, played linebacker at Alabama and later in professional football.

With Thomas out for the first game, freshman walk-on Craig Salley has emerged as the back up to Dillard. In addition, another freshman, Jaime Amos, also is in the mix as a reserve.

“I feel pretty good about that (linebacker) position,” Christophel said. “I think we are going to create good depth at that position. I think we have some pretty good football players at linebacker; they just need experience.”