The village was recently affected by flooding that caused damage to several villages in the area.

“What we [coalition forces] are trying to do is to distribute aid to those villages affected by the floods,” said U.S. Army Capt. Terrance McIntosh, a civil affairs officer from Phoenix. McIntosh and his team went to the village to distribute aid, including rice and cooking oil, among other items. 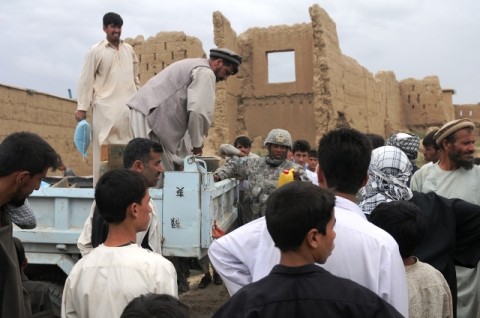 The flood damage caused emotional damage to the villagers, as well as physical destruction to their homes. This makes their situation that much more difficult, said McIntosh.

“The damage is pretty devastating for the people’s morale and spirits,” He said.

Distributing humanitarian aid to this village is also helping the relations with the local villagers and coalition forces, said McIntosh. The Malik, or village elder, of Bashikal was particularly impressed with the actions of the Coalition Forces during this difficult time.

“I would like to thank the Coalition Forces for coming to our aid during this difficult time,” said the Malik. “It is great to see the Soldiers come to help us from down the road. All the children know that help is coming when they see the trucks.”

“In a long line of efforts of the coalition forces being here, it’s important that we do whatever we can to help out if we see our neighbors in need,” said McIntosh.