Khowst Province, Afghanistan – Of the many ceremonies and remembrances commemorating the anniversary of the 9/11 attacks, one struck a personal note for a group of Soldiers at Forward Operating Base Salerno September 11th.

The Soldiers are Army Reservists from New Jersey and New York serving with the 344th Combat Support Hospital. When the twin towers of the World Trade Center fell, two of the unit’s Soldiers were inside. 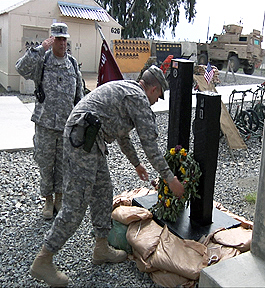 U.S. Army Capt. Michael Mullan and Sgt. Shawn Powell had been serving with the 344th CSH for years before the September 11th tragedy. On that dark day, both men were working as New York City firefighters and had responded to the tower disaster in an attempt to save the thousands trapped inside.

“It was a day like no other in my lifetime, and I think it’s important we don’t let the memories of that day fade away,” said Lt. Col. Gregory Kolb, commanding officer, 334th CSH, and a resident of Dacula, GA. “It is something that our country has never encountered before, and I think it’s important we continue to tell the story, so our children and grandchildren know. The memories of that day should never fade away.”

To honor the memory of the 2,977 lives lost that day, the unit held a short remembrance ceremony outside the hospital. Although the ceremony was not a huge event, it was still very emotional for several Soldiers of the unit.

One of those Soldiers was U.S. Army Sgt. 1st Class Tunde Babawale from Brooklyn, NY, and a combat medic of the 344th CSH. He was in Brooklyn, just five miles from the World Trade Center when the planes slammed into the twin towers. He could see the smoke and flames rising into the sky that day and his heart sank as he thought of the people inside, he said.

“I find it very sad that a lot of people back home question the reason we are here,” he said. “We’re here because some evil people attacked America on American soil. It was a cowardly act of wickedness, and we could not let them get away with it.”

The anniversary of 9/11 is very personal and emotional for Babawale, not only because he was close to the event, but also because close friends of his died in the attack. He remembered the personal ties he shared with Powell.  “He could brighten up a room just by walking in,” said Babawale. “Powell would make things that were simple or ordinary fun.”

Babawale and Powell had known each other for years and attended combat medic school together. 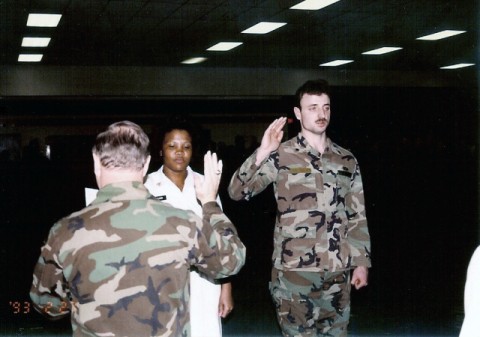 Mullan was also well known and respected in the unit. “Mullan was a Soldier’s Soldier,” said U.S. Capt. Charles Fiske, a paramedic and emergency room nurse, 344th CSH and resident of the Bronx, NY “He always trained hard and had a great attitude.”

Fiske met Mullan in 1998 during annual training, and the two became fast friends. Because Mullan worked for the fire department and was training to be a nurse practitioner, the two had a lot in common and often moved in the same circles.

The tragic events of 9/11 took many of Fiske’s friends that day and motivated him to dedicate his life to the service to his country from that day forth.

“This is my fourth mobilization,” he said. “It’s the least I can do, because so many Americans gave their lives that day.” Fighting to hold back his feelings, Fiske slightly pounded the table with his fist as he spoke. “That’s why we’re here. We’re here because of what happened on September 11th, 2001.”

Soldiers of the 344th CSH held a 9/11 remembrance ceremony at Forward Operating Base Salerno for Mullan a member of their unit who was killed in the 9/11 attacks.

Soldiers of the 344th CSH held a 9/11 remembrance ceremony at Forward Operating Base Salerno for Powell a member of their unit who was killed in the 9/11 attacks.