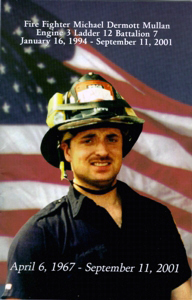 Capt Michael D. Mullan, a New York City fire-fighter and U.S. Army reservist serving with the 344th Combat Support Hospital, died on Sept. 11, 2001 while trying to save thousands of Americans who were trapped inside the World Trade Center following a terrorist attack. Soldiers of the 344th CSH held a 9/11 remembrance ceremony at Forward Operating Base Salerno for Mullan and another member of their unit who was killed in the attacks on Sept. 11.