After dropping a 2-1 decision to Southeastern Louisiana, Sunday, head coach Kelley Guth’s team was prepared to come out against the Bulldogs with a renewed focus on scoring goals. That much was evident as the Lady Govs took a 1-0 lead in the game’s first minute, after a foul inside the box set up a penalty kick by freshman Natalia Ariza.

Freshman Andy Quiceno, who finished with two assists, set up the next goal by freshman Tatiana Ariza only two minutes later. Quiceno’s cross was perfectly timed and Tatiana pushed it through. It would be Tatiana again in the 22nd minute – this time from Natalia – as she pulled the keeper out and scored it to the right. 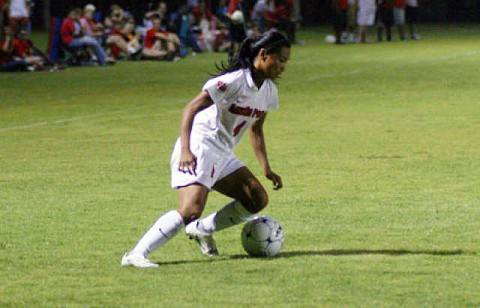 “Tatiana is an exciting player and we’re happy with what she’s brought to the team,” Guth said. “That goes for saying with all of our freshman. The fact that we have so many players that can be threat offensively really makes our whole team a threat. We’re doing a lot on the field that puts Tatiana in position to get it done, so give credit to the team for her success.”

With a 3-0 lead at the half, the Lady Govs seemed to fall into complacency on the offensive side. It wasn’t until the 67th minute that freshman Joceline Quiceno fired a shot off the post that senior Monique Wong corralled into the net.

“Sunday was disappointing for our team,” Guth said, “because I thought we played really good soccer in the first half, but we let it get away. It was important for us to come back tonight and refocus. We talked about executing and putting the ball in the back of the net. Tonight we wanted to make a point of scoring goals.”

The Lady Govs outshot the Bulldogs 20-3. Andy Quiceno led Austin Peay with five shots, while Tatiana had four shots, all on goal.

Austin Peay returns to action with a 1:00pm, Sunday game against Valparaiso. The Lady Govs will host a free youth clinic to kids eighth grade and under following the game.