The 2010 Ohio Valley Conference Player of the Year, Harris reached even par on literally an up-and-down day—Harris’ 18 holes fashioned seven birdies but also seven bogeys to go with four pars. The senior led the Lady Govs to their tourney low Tuesday, a 307. 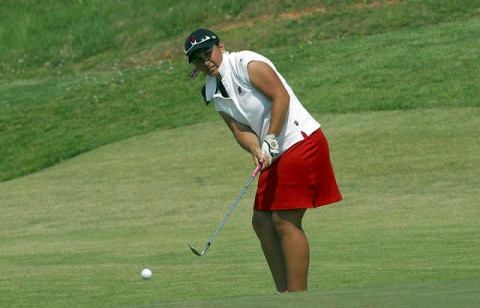 “Anytime you have someone shoot par you are going to have a good chance of a pretty good (team) score,” APSU coach Sara Robson said. “The seven birdies certainly were a positive, but as a team we had a lot of birdies in this tournament.

“As I told the girls, we have to get rid of the big numbers—that hurt us the entire tournament. In our low four scores, we lost eight shots on the last four holes today.”

Senior Beth Ann Burns produced a solid tourney as an individual, shooting a final-round 81 to finish at 243 (t/35th).  Sophomore Tabitha Beard, coming off spring wrist surgery, shot a final-round 82 to finish with a 250 (t/43rd), the same score by freshman Tala Mumford, who bounced back from a college-career opening 91 to shoot 80-79 over the final two rounds.

“It was a good first tournament for us,” Robson said. “It really gave us a good feel of where we are right now and what we need to work on.”