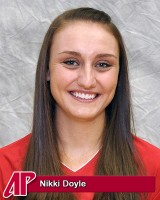 Austin Peay (10-1, 1-0 OVC), which won its 10th consecutive match, won its home and conference opener courtesy a 67-kill performance – two shy of the team’s season high – and a .241 attack percentage.

The first set was a combination of scoring runs by each team. Austin Peay (10-1, 1-0 OVC) opened with a 7-3 run as Doyle recorded three kills and senior Jessica Mollman added two kills. Murray State answered with a 10-6 run sparked by three Ashley Nenninger kills. The Racers later used a 9-3 run to build a 22-18 advantage as five different hitters recorded a kill during the burst.  Austin Peay fought back, using consecutive kills by junior Ilyanna Hernandez to force a 23-23 tie. After trading points to get to 25-25, the Lady Govs got consecutive kills from Hernandez and Mollman to seal the set, 27-25.

The Lady Govs led the second set wire-to-wire, opening with three consecutive points to start an 11-3 run. The lead reached double digits, 17-6, after another three-point run. Austin Peay traded points from there to post the 25-13 set win and take a 2-0 set lead.

Murray State (3-8, 0-1) won the third set after trailing until taking a 20-19 lead. The Lady Govs broke out of the gate with a 9-4 run and seemed poised to run away from Racers but an 8-3 Murray State run tied the set, 12-12. Austin Peay used three straight points to take a 19-16 lead and force a Murray State timeout. The Racers responded to the time out with five consecutive points to take their first lead. Austin Peay would get as close as 24-23, but a Logan Su kill ended the threat, Murray State winning the set 25-23.

The Lady Govs found themselves trailing by five points, 10-5, early in the fourth set. However, they pieced together a 8-2 run – as senior Taylor Skinner scored a kill and service ace while junior Kayla Grantham added a pair of kills – to take a 13-12 lead. From there neither team enjoyed more than a one-point advantage. It took four consecutive kills – by junior Marie Mullins, Doyle, Mollman and Doyle in succession, for the Lady Govs to pull out the match-ending 25-22 set victory.

Nenninger came off the bench to lead Murray State with 16 kills. Su finished with 12 kills but committed eight attack errors.