Khowst Province, Afghanistan – Today’s battlefield is constantly changing, and keeping track of all the moving parts and pieces can be challenging to any commander.

One of the technological tools in the commander’s arsenal is the RQ-11B Raven.

It is a small, hand-launched, remote-controlled, remotely piloted aircraft that can provide live, up-to-the-minute battlefield intelligence, surveillance and reconnaissance using photos and video. Its capabilities allow the commander to quickly put eyes on the enemy forces and track their movements.

Recently, Soldiers from Task Force Leader’s 1st Battalion, 187th Infantry Regiment took the opportunity to fly the Raven and check its functionality during training operations at Forward Operating Base Salerno.

“The Raven is a great asset for ground commanders,” said U.S. Army Sgt. Justin Miller, infantry team leader, Raven operator and native of West Palm Beach, FL, assigned to Company A, 1st Bn., 187th Inf. Reg. “It is an aerial reconnaissance tool that commanders at the company level can use when other surveillance assets are not available to them.”

The Raven was developed for the U.S. military and first introduced in 1999.  Since its introduction, it has undergone several changes, but its overall function and abilities remain the same. 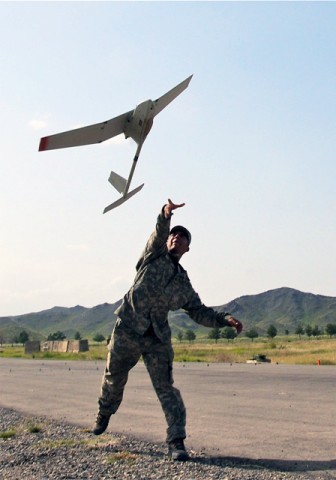 It is launched by hand; thrown into the air like a model airplane. It’s powered by a small electric motor and propeller and is capable of flying up to 6.2 miles from its launch site. It can reach altitudes up to 1,000 feet and speeds of 28 to 60 miles-per-hour.

Weighing just more than four pounds, it carries a payload of small color-video cameras as well as an infrared night-vision camera that can capture still photos and video during daylight hours or complete darkness.

The Raven is also versatile. It can be remotely controlled from an operator’s ground station or flown completely autonomously by pre-programming GPS waypoints into its navigation system.

Although there are numerous RPAs in use by today’s military, Miller says the small RPA has several advantages over its larger counterparts.

One advantage is its ability to get into the air quickly.

“We can usually have the Raven in the air within 15 minutes,” said Miller. “It’s really light and very portable. It can even be put into an assault pack and taken on patrols if necessary,” Miller said.

The unit has used the Raven on several occasions since arriving in Afghanistan, and have in fact been successful in locating enemy forces.

“I have flown the Raven on six missions so far,” said U.S. Army Spc. Marcos Nino, Raven operator and communications specialist from Dallas, assigned to Co. A, 1st Bn., 187th Inf. Reg. “When we were at Forward Operating Base Boris, we came under a mortar attack, so we launched the Raven to try and find the enemy. When I got the Raven in the air, I was able to spot several insurgents running from the area and trying to hide.” 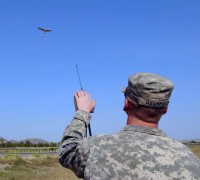 A single Raven costs about $35,000, with the total system costing nearly $250,000. Although that may seem expensive to some, Miller says it’s worth every penny.

“These are definitely worth the cost,” he said. “To have an asset like this available to the ground commander is invaluable. It gives him up-to-the-minute information on enemy movement without having to commit troops to reconnaissance patrols, needlessly putting them in harm’s way.”

Once the Raven has completed its mission, it lands itself by auto-piloting to a predefined landing point and then gliding to the ground.

“I really enjoy using these on missions,” said Nino. “They are fun to fly, and they are so quiet the enemy can’t see them or hear them. However, we can see the enemy, and that gives us a big advantage.”