As Veteran’s Day approaches, if you can read only one book this year, let it be Blood River to Berlin. No, you aren’t going to find it on the best seller list available from a New York publisher. This book is written by your neighbor, Michael Freeland, who lives at 1412 Shallow Lake Circle, Hopkinsville, KY 42240. You can e-mail him at freelandco@hotmail.com or call him at 270-886-0551 to order the book.

Published by Proctor’s Hall Press in Sewanee, Tennessee, Blood River to Berlin: The World War II Journal of an Army Medic is the story of someone who started to school in a one-room schoolhouse in a remote community called “Blood River” in Henry County, Tennessee. He dropped out of high school, went to Detroit to work, and was drafted into the United States Army.

His story will touch your heart, make you weep, and will make you proud that you share his love of our country.

I met Michael Freeland at Watuaga Elementary School on the morning of a parent-teachers conference day. I still don’t know how he knew to visit me. I had never seen him before some teachers said, “That man sitting in the chair in front of the office is waiting for you.”

We sat down together to talk for a few minutes in the school library and I learned that he had written this remarkable book. He told me he had gone to Europe more than once to research it. When I asked him how much it costs, he said, “Not nearly enough.” After I read it, I thoroughly agreed.

The book is available from Mr. Freeland for $24.95 plus a nickel for his autograph. He insisted that his name inscribed in the front was worth “just a nickel.” Cost for shipping one or two copies is $5.00, so the total would be $30 for one copy and $55 for two.

Mr. Freeland has shared some of his fascinating experiences in Blood River to Berlin. His descriptions of the 17- and 18-year-old boys who became men under the worst of conditions in World War II transform the idea of war into cold hard reality.

We read and are instantly engulfed in the fear, pain, anguish, homesickness, and heroism that having your life endangered second-to-second brings. We see our fathers and grandfathers facing unseen enemies and piercing bullets as they are dropped from airplanes sometimes into places where they have no chance of survival, or are sent off landing craft into water filled with the blood of their buddies.

We learn about young men who lose their eyes, their arms, half their bodies, and those who face amputations, yet buoy the spirits of their buddies with unfailing cheerfulness. We encounter men whose minds are broken by shell shock never to return.

We listen with the troops to songs like “Sentimental Journey, “Comin’ in on a Wing and a Prayer,” “Do Nothin’ Till You Hear from Me,” and “Stardust.” We see them learning to “hurry up and wait” and find out that the waiting before the battle is some of the worst of times.

We hear the admonition to every soldier, “It’s okay to be ignorant. Ignorance is temporary, But stupid? Stupid is forever. Stupid can get you killed.”

We meet an elderly French woman who says to American veterans who return after 50 years to remember D-Day, “We are free. It’s because of you, Americans, that I stand here a free woman today. I salute you. My family thanks you. I thank you.”

Mr. Freeland writes, “There’s no other place in the world to compare to the stark loneliness and misery of a foxhole. For soldiers in holes up to their knees in icy water in the frozen snow-covered Ardennes forest, time stands still. Gangrene and frozen feet are a threat dreaded as much as death.”

Mr. Freeland came home to start one of the first FM stereo radio stations in this country with his brother, Jim. He didn’t want to remember the scenes he lived through his diary during World War II, but he did. He faced the demons that rose from those pages in the cracked leather journal.

The United States is losing approximately 1,500 World War II veterans a day. Don’t miss meeting this one by reading his riveting story.

Describing his early days in Tennessee until he rode into Berlin with the American troops during the last days of the war in Europe, and sharing the hours he spent with other veterans when they returned to the rows of crosses in Normandy, Mr. Freeland has written a book you won’t want to put down. 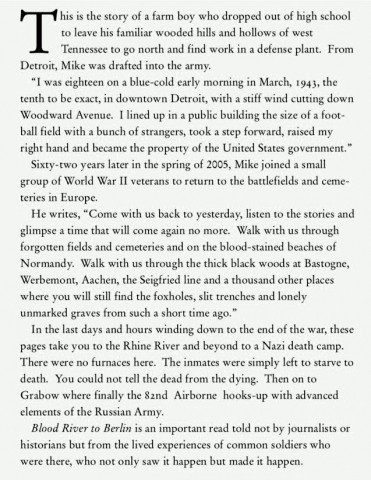