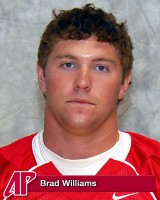 Williams is one of 121 semifinalists, with Eastern Kentucky’s Logan O’Connor the only other Ohio Valley Conference representative on the list.

Nominated by their schools, which are limited to one nominee each, semifinalists must be a senior or graduate student in their final year of eligibility, have a GPA of at least 3.2 on a 4.0 scale, have outstanding football ability as a first team player or significant contributor, and have demonstrated strong leadership and citizenship. The trophy, previous known as the Draddy Award, was renamed last fall in honor of Bill Campbell, the chairman of Intuit, former player and head coach at Columbia University and the 2004 recipient of the NFF’s Gold Medal.

Williams owns a 3.565 grade-point average as a business finance major with a minor in real estate. The Clarksville native also is a re-founding father of Alpha Tau Omega and is a member of the Omicron Delta Kappa National Leadership and Phi Kappa Phi National Honor Societies.

The NFF Awards Committee will select up to 15 finalists and announce the results via national press release on Thursday, October 28th. Each finalist will be recognized as part of the 2010 NFF National Scholar-Athlete Class, receiving an $18,000 post-graduate scholarship. The Campbell Trophy winner, who will have his scholarship increased to $25,000 and receive a 25-pound bronze trophy, will be announced live at the NFF’s Annual Awards Dinner on December 7th at the prestigious Waldorf=Astoria in New York City. A total distribution of $277,000 in scholarships will be awarded that evening, bringing the NFF’s all-time scholarship distribution to $9.5 million.