“Any time we get new ANA in, we try to do some training with them to assess their knowledge of basic first aid and to help improve their current level of training,” said U.S. Army Staff Sgt. Adam J. Hendrickson, of Co. I, 2-506th, 101st Airborne Div., and native of Winter Park, FL. 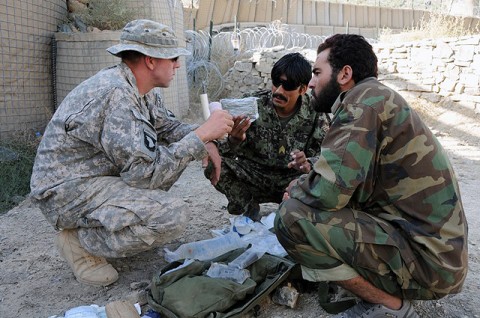 U.S. Army Spc. David A. Bryan, a combat medic, checks an Afghan National Army combat medic’s aid bag during a class given to the ANA by U.S. Army medics Sept. 27th at Combat Outpost Munoz. Bryan took the time to go through each item in the bag, explained the importance of carrying only the items you need while on patrol and replenished the ANA medic’s bag with new supplies. (Photo by U.S. Army Spc. Luther L. Boothe Jr., Task Force Currahee Public Affairs Office)

“We do this type of exercise to better train the ANA soldiers so their medic has an extra asset with them out on patrols,” said U.S. Army Spc. Christopher M. Tobin, a combat medic from Co. I, 2-506th, 101st Airborne Div., and native of Dayton, Ohio. “It is also important for us to know that the Soldiers out with us are proficient in combat medical care.”

“Teaching these soldiers first aid is a necessity for the [operational tempo] because, out on patrols, our medics cannot be everywhere at once,” said Hendrickson. “So, the more guys we have out there who know how to do the initial treatment on ground, the better it is for everyone.”

“It is important for us to pass our knowledge on to them because if we are out on patrol together and I go down, he might be working on me or working on one of my guys,” said U.S. Army Spc. Jon C. Humphries, a combat medic from Co. I, 2-506th, 101st Airborne Div., and native of Hartsville, SC.

The Currahee medics assessed the medical knowledge base of the ANA to ensure they have a basic knowledge of combat care. 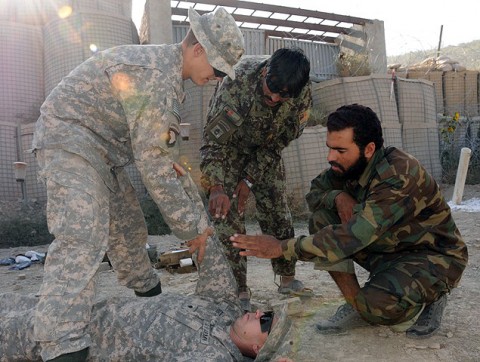 “I wanted to start from the very beginning of what to do if somebody is down,” said Humphries. “When they come back tomorrow we will review what we went over, refine the training and make it more advanced.”

Hendrickson stated hemorrhage control was vital to the training because uncontrolled bleeding in the field can be the difference between life and death. “They had a lot of questions, but I wanted them to learn that after fire superiority is gained, stopping the bleeding is the most important step.”

“We were teaching them how to check for bleeding by sweeping the body, how to apply pressure dressings and how to do a basic assessment of the casualty,” said Tobin. “We showed them how to do it on a person because we wanted to give them a physical training aid to give them a hands-on opportunity to do the procedure.”

The medics also took the time to mentor the only medic of the company-sized ANA element by helping him organize his first aid kit and providing him with guidance as to what he will need during a patrol. 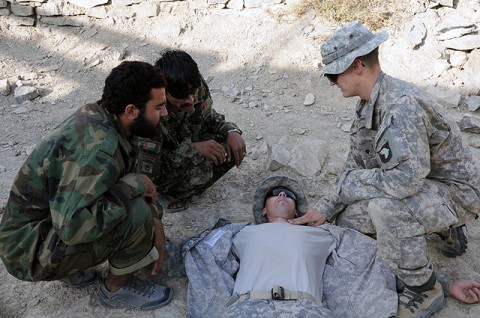 “I just wanted to make sure his bag was squared away because a lot of times they don’t have the right equipment in there,” said U.S. Army Spc. David A. Bryan a combat medic with I Co. and native of Albuquerque, NM. “I also wanted to make sure he knew how to use everything that was in his bag.

“I upgraded some of his equipment to help him out and explained that some of the items he had, like cold medicines, he wouldn’t need on patrol,” said Bryan. “By upgrading his bag, it not only helps him out by having the best equipment, but it also ensures I have another resource bag while we are out there together on patrol.”

The Currahee medics know the importance of combat medical care out on the battlefield.

“Part of our mission in Afghanistan is to mentor the ANA so they can take over once we leave,” said Tobin. “We plan on doing this type of training with the ANA throughout our deployment to ensure they gain all the medical knowledge possible.”