New York, NY – The Advertising Council, in collaboration with the USDA Forest Service, the National Association of State Foresters (NASF) and Disney, announced today the launch of a new series of public service advertisements (PSAs) designed to raise awareness about wildfire prevention.

The new PSAs feature characters and scenes from Disney’s Bambi and communicate Smokey Bear’s enduring message, “Only You Can Prevent Wildfires.” Bambi starred in the first Wildfire Prevention PSA in 1944, prior to Smokey Bear’s debut in the campaign later that year.  The new ads are being distributed to media outlets nationwide to coincide with Fire Prevention Week (October 3rd-9th).

Only You Can Prevent Wildfires

Since 1944, Smokey Bear has been a recognized symbol of protection of America’s forests. His message about wildfire prevention has helped to reduce the number of acres lost annually by wildfires, from about 22 million (1944) to an average of 6.5 million today.  However, wildfire prevention remains one of the most critical environmental issues affecting our country.  Many Americans believe that lightning starts most wildfires. In fact, on average, 9 out of 10 wildfires nationwide are caused by people. The principle causes are campfires left unattended, debris burning on windy days, arson, careless discarding of smoking materials or BBQ coals, and operating equipment without spark arrestors. 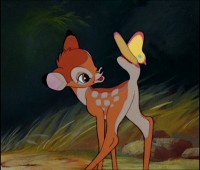 Created by Disney, the new television, radio, outdoor and web PSAs specifically target elementary-school children and their parents and seek to continue to decrease the number of human-caused wildfires. The PSAs feature Disney’s Bambi and his woodland friends as they teach children to “Protect Our Forest Friends.”

The PSAs direct audiences to visit the campaign’s website, www.smokeybear.com [1], where they can take a pledge and learn more about wildfire prevention. While the new PSAs directly target elementary school children, Smokey Bear continues to encourage young adults to be proactive in preventing wildfires through his social media channels on Facebook, MySpace, Twitter and YouTube and through a series of online games and widgets featured on the sites: 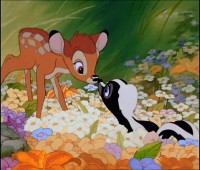 “We are delighted to reunite Smokey Bear and Disney’s Bambi to remind Americans about their important role in wildfire prevention. They are both beloved and enduring characters and these wonderful new PSAs will continue to resonate with a new generation of children and further the reach of Smokey’s critical messages,” said to Peggy Conlon, president and CEO of The Advertising Council.

Since 1944, Smokey Bear has been communicating his well-known message, “Only You Can Prevent Forest Fires.” In 2001, the term ‘wildfires’ was introduced to define all unwanted, unplanned fires in natural areas, including grass fires and brush fires.

The Ad Council will be distributing the new PSAs to media outlets nationwide. Per the organization’s model, the PSAs are airing and running in advertising time and space that is donated by the media. Over the last 66 years, media outlets have donated more than $1 billion in time and space for the Wildfire Prevention campaign.

The USDA Forest Service is the agency responsible for overseeing the use of Smokey Bear in cooperation with the National Association of State Foresters and the Advertising Council.  The USDA Forest Service manages 193 million acres of national forests and grasslands for the American Public.  Its mission is to sustain the health, diversity, and productivity of the Nation’s forests and grasslands to meet the needs of present and future generations.

The National Association of State Foresters is comprised of the directors of forestry agencies from the fifty states, eight U.S. territories and associated states, and the District of Columbia. Through public-private partnership, NASF seeks to advance sustainable forestry, conservation, and protection of forest lands and their associated resources.  As a partner with the USDA Forest Service, State Foresters are committed to the continued delivery of Smokey Bear’s message of personal responsibility in wildfire protection.

Disney, together with its subsidiaries and affiliates, is a leading diversified international family entertainment and media enterprise with five business segments: media networks, parks and resorts, studio entertainment, consumer products and interactive media.

The Ad Council (www.adcouncil.org [7]) is a private, non-profit organization that marshals talent from the advertising and communications industries, the facilities of the media, and the resources of the business and non-profit communities to produce, distribute and promote public service campaigns on behalf of non-profit organizations and government agencies. The Ad Council addresses issue areas such as improving the quality of life for children, preventive health, education, community well-being, environmental preservation and strengthening families.