Margery Allingham is considered one of the four “Queens of Crime” along with Agatha Christie, Ngaio Marsh, and Dorothy L. Sayers. Margery was born in Ealing, London in 1904. Her father, Herbert John Allingham was editor of the Christian Globe and the New London Journal (for which Margery later wrote articles and Secton Blake stories). Her mother, Emily Jane Allingham, was also a contributor of stories to women’s magazines.

Margery’s aunt, Maud Hughes, ran a magazine where Margery published her first story when she was eight years old.

The family moved to the village of Layer Breton when Margery was a baby. She went to school there but returned to London in 1920 where she attended Regent Street Polytechnic. Studying drama and speech-training, Margery was able to cure a stammer she had suffered throughout her childhood. She also met her future husband, Philip Youngman Carter, at this school; he later collaborated with her and designed jackets for many of her books after they married in 1928.

Margery Allingham’s detective, Albert Campion, first appeared in 1929 in The Crime at Black Dudley as a minor character. By this time, she had already published Blackkerchief Dick in 1923 (when she was 19) and the serialized story, The White Cottage Mystery, published by the Daily Express in 1927.

Allingham’s American publishers pressured her to continue to write about Campion with whom they were fascinated. Campion has been described as being a rather “silly man about town” originally but turned out to be a mysterious upper class person who worked under an assumed name; he was able to involve himself not only in echelons of nobility and government but also in the shady underworld of criminals. His “sidekick” was Lugg, a former cat burglar who served as his servant. Over the years, Campion develops as a character who falls in love and marries; later his wife Amanda and he have a child. Campion is portrayed sometimes as a detective and sometimes as an adventurer. After the war, it is increasingly obvious that Campion was involved in counter intelligence.

Albert Campion appears in nineteen novels as well as a number of collections of stories. Allingham wrote four novellas and 64 stories. Her masterpiece is considered by many to be The Tiger in the Smoke (1952); this novel focuses on a character study of serial killer Jack Havoc. A film version of this book as made in 1956.

In 1989-90, the BBC ran a popular series of Campion adaptations starring Peter Davison as Campion and Brian Glover as Lugg (series is now available on DVD). 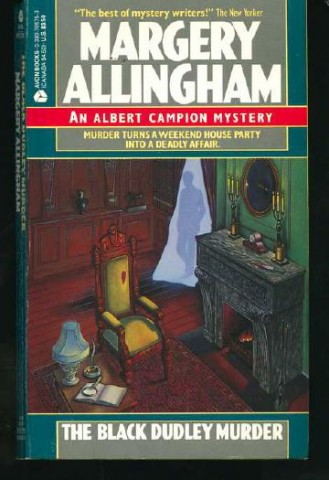 Vintage, the literary paperback publishers of Random House has begun reissuing Allingham’s novels as of 2004.

Margery Allingham considered the mystery as “a box with four sides: a killing, a mystery, an enquiry and a conclusion with an element of satisfaction in it.” Needing to support herself with writing, she separated her books as being “right handwriting” for pleasure and “left handwriting” as her commissioned work.

The Margery Allingham Society is quite active and lists on its website, margeryallingham.org.uk, all her works and an extensive biography. Each novel has a plot summary included. The Society has frequent events that are also listed at this location.

Following her death, her husband completed her final Campion novel, A Cargo of Eagles; it was published in 1968.

Allingham’s focus was not on the detection element of the mystery novel; her interest was in why the person behaved in the manner in which he did. The development of character in the mystery novel was significantly advanced through the writing of Margery Allingham, making her novels one that no mystery reader should miss.

Jane Stevenson (in an article in The Guardian in 2006) described Allingham’s books as those most often “nicked” from her collection. She believed that visitors would start one of Allingham’s mysteries during a brief stay and could not resist taking it home to finish it. For any mystery reader, the idea that “here is a book that cannot be forgotten” is one of high praise.

Enjoy Autumn’s Many Colors in Tennessee