Nangarhar Province, Afghanistan – It was 8:00am, November 6th. Many young men in the United States were still sleeping on this Saturday morning.

However, that wasn’t the case for the Soldiers of 3rd Platoon, Troop A, 1st Squadron, 61st Cavalry Regiment, on Forward Operating Base Connolly here. They were already up, checking over their mine resistant ambush protected vehicles and equipment to get ready for the day’s mission.

The mission on this day would be a challenging one. Twenty-two Soldiers, mostly from the 3rd Platoon “War Machine,” along with 25 Afghan National Army soldiers and two interpreters would convoy seven miles to a staging site, dismount, and scale a more than 4,000-foot mountain en route to the remote Gurem Village, which sits on the side of another bordering mountain.

The mission was to conduct a key leader engagement. It would be the scout’s first visit to the village, and there was talk of possible Taliban influence there. None of the scouts knew quite what to expect.

“That’s why I liked that mission,” said U.S. Army Spc. Jacob Phillips, a cavalry scout from Irving, Texas, with 3rd Platoon, Attack Troop. “It’s more along the lines of what we’re supposed to do as scouts – to go where no one has gone before.”

Around 9:00am, the American and Afghan soldiers loaded into their vehicles and headed out into the dusty, desolate countryside outside Connolly. The heavy vehicles weaved around rock piles and other obstacles during the 45-minute journey to the staging site, which was on a large plateau at the base of the mountain that Gurem sits on.

All of the Soldiers of 3rd Platoon had experienced enemy contact in the past, and, though they remained vigilant, their mood was light as they headed through a village just before the staging area. They cracked jokes to one another through their headsets as the truck commander navigated the driver of his route to the area.

The convoy was uneventful. The vehicles passed waving children, men on motorcycles, and mules and wandering livestock without incident. The Soldiers parked their vehicles on the edge of the plateau and prepared for movement, lining up into teams led by the Afghan Army Soldiers.

“When we first started working with the AA back in August it was kind of a situation where we would take the lead and they would join in,” said U.S. Army 2nd Lt. Daniel Wild, an armor officer from Brandenberg, KY, and platoon leader of 3rd Platoon, A Troop. “Now it’s getting to the point where they take the lead and we pretty much join in. Their information was vital in the success of the mission.” 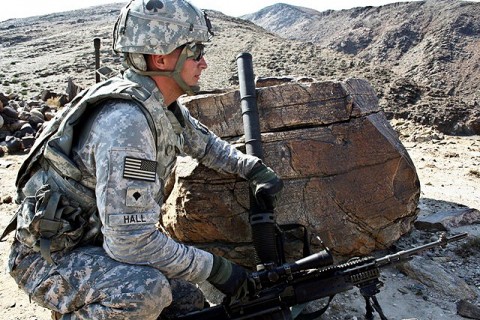 Mohammed, the platoon leader for the Afghan Army weapons team with which 3rd Platoon had been working, had been through Gurem once before, said Wild. The Afghans were instrumental in planning the mission, as they recommended a better staging area for the vehicles due to their knowledge of the terrain.

To get to Gurem, the Soldiers would have to hike through the Towr Gahr Pass. At the foot of the pass, between the staging area and the mountains, the Soldiers walked through the small village of Kakarak, where hordes of children were playing outside a school. Other curious villagers came out to watch the Soldiers as they crossed through their farm fields up to the stream.

The stream was high and moving swiftly from rainfall the day before and there was no easy way to cross. Soldiers waded through the waist-high murky water and pushed through to the other side. That’s where the real work began.

For the next hour and 15 minutes, the scouts, most of them carrying large rucksacks or assault packs filled with radios, ammo or other gear, steadily climbed four gruelling miles to the top of the 4,000-foot mountain.

The Soldiers pushed each other along, maintaining a tactical marching interval, taking cover and pulling security when they made their few stops. They had scaled the mountain in 45 minutes less time than what they had estimated. It was a tough, four-mile trek, the platoon’s farthest foot movement of the year, but they toughed it out and got the job done.

The mountain overlooked the village of Gurem on the hillside beside it. When the Soldiers reached the summit, they set up an observation point. The troop’s snipers spread out to provide cover throughout the OP. They would provide security from above as the other Soldiers entered the village. Within minutes, they launched an unmanned aerial vehicle from the staging area, flying above the troops for extra surveillance of the situation.

The Soldiers said they were surprised by the reception they received upon entering the village. The village’s malik, or elder leader, Mohammed Ayub, was waiting with another man to greet them. Within minutes, three other men came out with pots of fresh chai tea and glasses for everyone in the group. 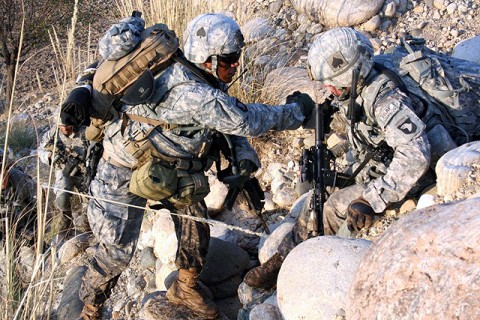 Wild went about his business of seeking the answers he and the Afghans had come for, while the other Soldiers pulled security around the perimeter of the tiny village. He asked Ayub if anyone from the government had been to the village before. Ayub said it had been more than a year since anyone had been there.

Wild asked if there was a well or electricity in the village. There was neither. Instead, water came from a nearby spring.

“These were the worst conditions of any of the villages we’ve visited,” said U.S. Army Sgt. 1st Class Chauncy Nash of Honolulu, Hawaii, the platoon sergeant for 3rd Platoon, A Troop. “The other villages we’d been to at least had electricity.”

Wild and a civil affairs representative assessed more of the village’s needs. He asked if anyone in the town was sick.

An elderly man, who struggled to walk, was led outside and A Troop medics U.S. Army Sgt. Jeffery Pettee of Port Huron, MI, and U.S. Army Spc. Andreas Plaza, of Freeport, NY, talked with the man about his health and administered him some over-the-counter medications, giving the interpreters instructions for the proper dosage.

Wild also probed for some of the tactical information he was seeking. Ayub said there were no weapons in the village, allowing the Soldiers to freely explore. There were 12 brick/mud huts, housing approximately 120 villagers and 25 families.

Ayub seemed to have a stronger belief in the Afghan government’s abilities when the Soldiers left, said Wild.

When Troop A had all the information they came for, they bid the villagers farewell and set back up the ridge to the OP. Before they left, however, the Afghan Army’s team leader, Mohammed, reached into his wallet and gave the elderly man some of his own money as an act of good faith.

It had been a successful mission, and one that the Soldiers hoped would lead to promising future relations with the small village.

“I would like to see us help them get a well, and maybe some grain for fertilizer,” Wild said. “If the villagers are doing well, the Taliban can’t influence them.”