For the second time this season, senior Terrence Holt and junior Ryan White each rushed for 100-plus yards in a losing effort. Holt finished with 140 yards on 14 carries, including a season-high three touchdowns. He also had 189 yards on kick returns, totaling 338 all-purpose yards. White had one touchdown on 119 yards, carrying the ball 21 times.

Holt’s first TD run, a 44-yard, third-down run, cut Murray State’s lead to 21-14 at the beginning of the second quarter. The Racers answered with a 18-yard touchdown run by Casey Brockman, and then back-to-back field goals to make it 34-14 at the break. 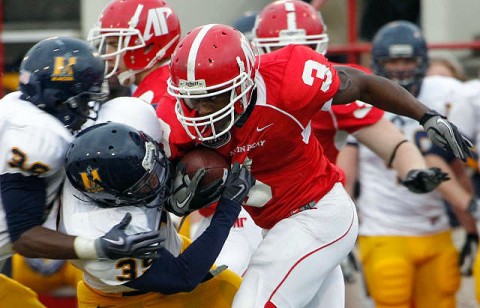 A 50-yard TD run by Holt opening the third quarter was answered by three straight Murray State touchdowns to make the score, 54-21, with 5:36 to play in the third. The Govs would score two more rushing touchdowns while Murray State would get a final score by Duane Brady to set the final margin.

Even with the Govs backfield going for 371 yards, it was no match for Murray State quarterback Casey Brockman. The sophomore quarterback completed 38 of 57 passes for 497 yards and three touchdowns. Two receivers, Marcus Harris and Rashad Daniels, had more than 100 yard receiving. Brady, meanwhile, had a pair of TDs to go along with 114 yards rushing.

Holt also had 189 yards in kickoff returns for the Govs, giving him 1,051 yards for the season. He entered 2010 as the only player in Football Championship Subdivision history with a trio of 1,000-yard kickoff return seasons.

Senior Trent Caffee, making his first start at quarterback in 2010, suffered an apparent neck injury during a second-quarter scramble. He was taken to St. Thomas Hospital in Nashville. Caffee did offer his teammates the thumbs-up signal when he left the field.

Austin Peay closes out the 2010 campaign on the road, with a noon, Saturday, game at Eastern Kentucky.