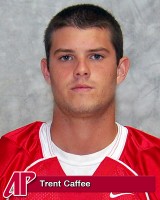 The senior signal caller was attempting to scramble for a first down when his helmet was ripped off by a would-be tackler. A helmet-less Caffee then had his head slammed into the shoulder pads of a defender before being taken to the turf where his head made contact with the artificial surface.

The Aledo, Texas native, making his first start of the season on the Governors’ Senior Day, offered the thumbs up sign to his teammates when leaving the field on a stretcher following the on-site medical team administering care for approximately 25 minutes.

Austin Peay hopes to have more information about his condition on Sunday.