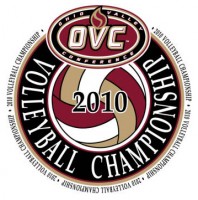 The second-seeded Lady Govs finished the OVC regular-season slate  alone in second place with a 14-4 conference mark. Austin Peay and regular-season champion and No. 1 seed Morehead State will receive byes into the semifinal round of the championship.

No. 3 seed Jacksonville State will face No. 6 seed Tennessee Tech in the tournament’s opening contest at 3:30pm (CT), Thursday. The day’s second game will feature No. 4 seed Murray State against No. 5 seed Eastern Kentucky at approximately 6:00pm.

Austin Peay will face the winner of the Jacksonville State/Tennessee Tech contest at 3:30pm (CT), Friday. Morehead State will meet the Murray State/Eastern Kentucky winner at 6:00pm. The two semifinal winners will meet in the championship game at 4:00pm, Saturday, with the winner receiving the league’s automatic bid to the 2010 NCAA Volleyball Championship which begins December 2nd-3rd at 16 campus sites.