Clarksville, TN – Austin Peay State University’s Area of Theatre in association with the APSU Center of Excellence for the Creative Arts is presenting the tragic tale of King Lear. Written by the English poet and playwright William Shakespeare, King Lear” is the story of an old monarch who watches his worst nightmare come true as his kingdom and his sanity crumble under the ruthless, bloodthirsty hands of his two eldest daughters. The play reminds audiences that power often blinds one to the pretense of loyalty and fidelity, but in one’s most humble hour, true family and friends are discovered. 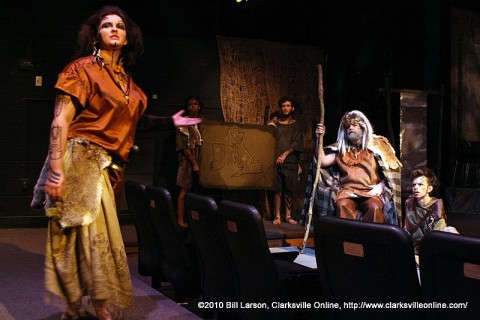 Goneril speaks as King Lear and his fool listens

The play is directed by assistant Professor Darren Michael who immerses the audience in the action of the play. Cast members enter and exit the theatre from all directions, with action occurring at various points throughout. You feel as if you are sitting in the grand hall of the castle watching the events as they transpire. The sets included wall panels flanking the auditorium which had less of an English and more of a Sumerian feel to them.

The play has it’s slow spots but they are more than balanced out by the fantastic fight scenes ranging from small duels to large scale battles featuring most of the cast. The dialog is as you would expect from a Shakespeare play top notch. This is also a sign of really good casting. 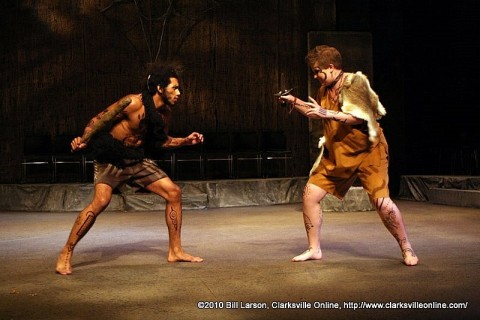 Edgar faces off against a soldier

Chris Hardin who played King Lear gave every sign of insanity from the simple hand movements, to the look on his face as he fights for moments of sanity. William Sinclair well plays the hulking Kent. Edward Garcia is anything but a fool.

For the daughters of Lear; Elizabeth Hadden is the scorned Cordelia, Sarilda Mayberry plays the stern Regan, and Rebecca L. Beasley plays the lovely Goneril.

Rounding out the main men is Russell Qualls who plays Stout Glouchester, Humberto Figueroa the devious Edmund, and Daniel Rye the ever faithful Edgar.

The show continues through the 21st of November, at 7:30pm November 17th-20th, and a 2:00pm matinée will be held on November 21st in the Trahern Theatre. Seeing this play is well worth the $10 price of admission!