New this year, the league eliminated first and second team designations in volleyball, instead coaches and sports information directors selected 14 student-athletes to the All-OVC squad. In addition, the league named a seven-person all-newcomer squad. 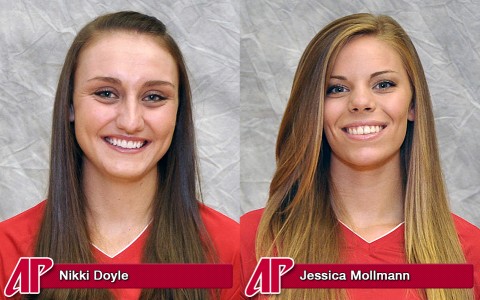 “Nikki has done an exceptional job this season especially considering the challenges that she has faced,” said Lady Govs head coach Haley Janicek. “She worked extremely hard to be a dominant player in this conference and this is an honor that is well deserved. Nikki is a huge asset to our team and only great things will come from her in the future. We are lucky to call her a Lady Gov.”

Mollmann, of Cincinnati, Ohio, follows last season’s second-team recognition with All-OVC honors this season. One of the Lady Govs captains, Mollman led the Lady Govs with a .303 attack percentage in conference play which was fifth-best in the league. Through the regular-season’s end, she is averaging 2.41 kills per set and 0.69 blocks per set, ranking third and second, respectively, on the squad.

“Jessica has really been the constant in this program,” Janicek said. “Year after year she has proven to be one of the most dominant middles in the OVC. But more importantly she has been an incredible leader for this program and has paved the way for all future Lady Govs.”

Austin Peay returns to action at the 2010 Ohio Valley Conference volleyball tournament at Morehead State. The tournament begins Thursday with first-round action. The Lady Govs, who receive a first-round bye, will face the winner of the Jacksonville State-Tennessee Tech first-round pairing in a 3:30pm (CT), Friday semifinal contest.