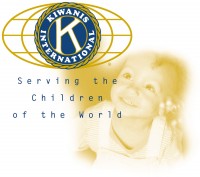 Clarksville, TN – The Clarksville Kiwanis Clubs gathered together on December 7th 2010 to bring the joy of Christmas into the hearts of 216 children from the Headstart program and various area child care centers. The annual Children’s Christmas Party is a partnership between the Hilldale and Downtown Kiwanis Clubs, and was organized and chaired by Andrew Hale, and Matt Dyce.

Downtown Kiwanis Club president Frazier Allen said “I am probably the worst gift wrapper in the room, but when the kids get these gifts, they won’t stay wrapped long. I want to say thank you to all of the people who made this years Children’s Christmas Party possible.”

On Tuesday morning the children started streaming in to the First Baptist Church Gym shortly after 10:30am. Soon after Kiwanis Club president Frazier Allen kicked things off with the Pledge of Allegiance, followed by an invocation given by Noel Nelson.

The kids were all ate their sack lunches, then it was time for Santa to come visit.

Being that it’s so close to Christmas Santa asked if Jim Monday would stand in for him once again. Jim’s has willingly undertaken this role for the last 20-25 years. “It’s one of the highlights of my year.” he said. The children faces lit up when the man in red appeared.

Now it was time for the presents.

Each boy and girl were given a bag full of gifts, and it turns out that Allen was right about the speed with which young children can unwrap their presents. The sound of tearing wrapping paper filled the air. The children’s eyes shone brightly as their gifts emerged from under the wrappings.

The first few groups of youngsters mobbed Santa, all crowding around him. After a bit with the help of the man in red we got some great photos of the kids with Santa, they are in the photo gallery below.

You can help the Kiwanis Club in their mission of service to the children of Clarksville by buying a ticket to the next Comedy on the Cumberland show which will be held on Wednesday, December 15th at 7:00pm in the Riverview Inn Ballroom. The show will feature the very funny Henry Cho, “I’m an Asian with a Southern accent. To a lot of people, that right there is funny.” According to Comedy on the Cumberland Founder Hank Bonecutter, “Henry Cho is one of the most popular stand up comedians in the country, we are also fortunate to have Brian Bates and Barb Neligan returning to share the stage with him for the evening.” Tickets are going for $50.00 a pair, and can be picked up at any F&M Bank location or from a member of the Kiwanis Club.

The sponsors of this year’s Children’s Christmas Party were Chris’ Pizza Village, Walmat, Members of the Downtown and Hilldale Kiwanis Clubs, Comedy on the Cumberland, F&M Bank, Ladd & Childers Document Solutions, Wyatt Johnson, Wendy’s of Clarksville, and Budweiser of Clarksville.