“I feel a personal responsibility for each and every one of you, since I sent you here,” Gates said. “I feel the sacrifice and hardship and losses more than you’ll ever imagine. So I just want to thank you and tell how much I love you guys.”

During the ceremony, Gates recounted the unit’s mission as it embarked upon its first full-on encounter with an organized Taliban enemy.

“We are breaking the momentum of the enemy and will eventually reverse it,” the defense secretary said. But, he added, “It will be a while and we will suffer tougher losses as we go.” 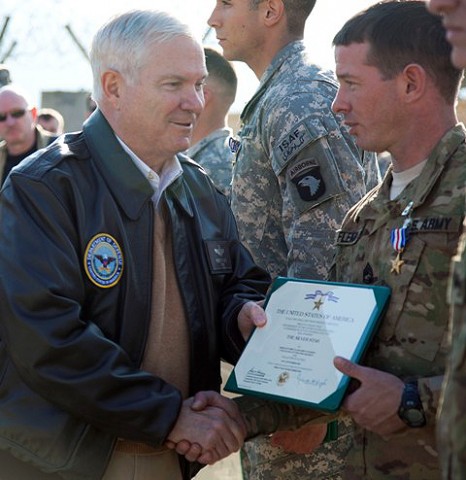 “It’s huge to have the secretary of defense come out here to recognize these Soldiers who are out there taking the fight to the enemy every day,” said Maj. Gen. John F. Campbell, commander of Command Joint Task Force-101 and Regional Command-East.

One of the Silver Star recipients echoed Campbell’s sentiment.

“It was an incredible honor that the secretary of defense would come; it was a little overwhelming,” said Tangen, Scout Platoon leader, Headquarters and Headquarters Company, 2nd Bn., 327th Inf. Tangen was formerly 1st Platoon leader of Company C, 2nd Bn. 32th Inf.

“FOB Joyce gets attacked almost every day, so just the fact that he would come to a remote FOB like this and put his life on the line – it doesn’t happen every day,” Tangen said. 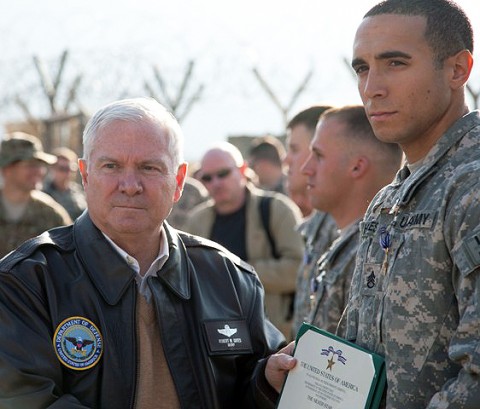 During Operation Strong Eagle, Task Force No Slack was tasked with clearing Daridam Village to stop insurgents from massing in the Ghaki Valley of eastern Kunar Province.

All recipients of the medals were recognized for their actions during time of heavy direct and indirect fire from the enemy during operation.

Tangen said he wouldn’t have been able to do what he did without his fellow Soldiers from 1st Platoon, Co. C.