Clarksville, TN – Last week, the Grammy Award nominations were announced, and some of the expected names – Jay-Z, Lady Gaga and Eminem – were at the top of the list. But the Grammys recognize more than simply pop music, and if you were to scroll down that list, you would see the category for “Producer of the Year, Classical,” and the name Blanton Alspaugh.

Alspaugh’s name might not carry the weight in some circles as say a Lady Gaga, but in the classical music world, he’s a respected and revered producer. And, according to the Grammy website, one of the reasons he was nominated this year for a coveted Grammy Award stems from his work producing the first album for a chamber ensemble founded by several Austin Peay State University music faculty members. That group, the Gateway Chamber Ensemble, was also considered for nominations in three other categories, including “Best Small Ensemble Performance.”

The ensemble, which formed in 2007 and is made up of APSU music faculty and other professional musicians, released its debut CD this year, “Wind Serenades.” The CD was put forward for Grammy nominations by leaders in the music industry who recognized the high quality of that CD.

“It’s important to understand that we only submit recordings which we believe merit Grammy consideration,” Alspaugh said. “That means that they represent excellence in performance and in production values. Any nomination for Producer of the Year ultimately rests on the artistry on display in these recordings.”

Dr. Gregory Wolynec, APSU associate professor of music and the ensemble’s conductor, checked the Grammy website the night of the nominations. He knew they had recorded a superior sounding album, but he was still surprised to see his name, and the name of the ensemble, on that site.

“Blanton is nominated as classical producer of the year, and as a result, our disc is up there with it,” Wolynec said. “It’s huge for us. It’s on the list of nominees with Eminem.”

Wolynec met Alspaugh several years ago when the producer was on campus recording an album in the APSU Music/Mass Communication Building’s Concert Hall. That space, which in 2006 was named as one of the top 10 “premiere concert halls” in the nation by The Robb Report Home Entertainment Magazine, is often used by music groups to record albums. A wide range of musicians, from renowned opera singer Patricia Stiles to country music star Kenny Chesney, have sought to perform in the Concert Hall because of its superior sound. The Gateway Chamber Ensemble performed a wind serenades concert in that hall shortly after the group formed, and the success of that show prompted Wolynec to give Alspaugh a call.

“I just said, ‘Let me send you something,’” Wolynec recalled. “He listened to it, and he’s the one who called Summit Records and said, ‘You need to make this happen.’ Summit Records got behind it, and then we were able to do the ‘Wind Serenades’ disc.”

The album was praised earlier this year by Fanfare Magazine, a leading classical music publication. In a review of “Wind Serenades,” music critic Jerry Dubins said, “Of the recorded performances I know of the Mozart – which include those by the Academy of St. Marin in the Fields Chamber Ensemble, the Orpheus Chamber Orchestra, the Orchestra of St. Luke’s Chamber Ensemble and Consortium Classicum, I would pick the new Gateway Chamber Ensemble out of the pack, not only for its refined playing, but for finding that elusive balance between the music’s high-spirited playfulness and its sensuous soulfulness. Merriment and melancholy mix in matched measure in Mozart’s masterpiece.”

In a different article in the magazine, Fanfare music writer Steven Ritter wrote, “Wolynec and his colleagues have managed to assemble a top-notch performing ensemble that now enters the big leagues with the national and international release of its new super audio CD.” 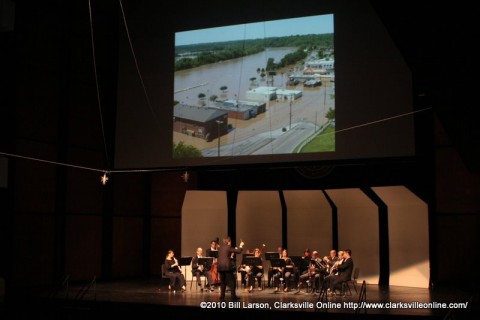 “I attended the recording sessions and Blanton was sitting beside the recording engineer reading the score and notating sequences that he felt needed another take,” Christopher Burawa, director of the APSU Center of Excellence for the Creative Arts, said. “His attention to detail, I believe, is what makes this disc an important contribution to the classical field. And our talented faculty musicians, under Greg Wolynec’s direction, delivered.”

The Grammy Award winners will be announced on February 13th, and while most people across the country are waiting to see if Lady Antebellum beats Katy Perry, the Austin Peay community and Clarksville will be focused on that classical music producer of the year category.

Regardless of the outcome, the good news for music fans is that Alspaugh and the Gateway Chamber Ensemble are currently working on a new CD, “Chamber Symphonies,” featuring works by Schreker, Enescu and Schoenberg. The “Wind Serenades” CD is available for $15.00 at www.gatewaychamberensemble.com.

For more information, contact the APSU Department of Music at 931-221-7818 or visit the ensemble’s website at www.gatewaychamberensemble.com.