HomeBusinessF&M Bank has a strong commitment to customers, community
Business

F&M Bank has a strong commitment to customers, community

Clarksville, TN – When you take a look at the Banking industry in Clarksville, F&M Bank will definitely be at the top of the list. The bank is well known for their top notch customer service, and their philanthropy in the community.

They have received national recognition in The Wall Street Journal, Entrepreneur Magazine, BusinessTN Magazine. The bank has been named as one of Tennessee’s top 15 independent banks, and are currently the twelfth largest community bank in Tennessee. F&M Bank is frequently held up as being the role model for other community banks 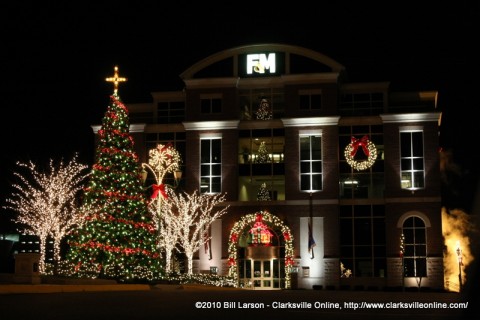 In 2007 F&M Bank President and CEO Sammy Stuard received national honors from the American Banker Newspaper when he was named The Community Banker of the Year, and he currently serves on the Board of the Clarksville Area Chamber of Commerce.

“As F&M Bank, we remain steadfast to the traditional financial principles which are responsible for our success. By providing a rewarding work environment and personal attention to each customer, we will continue to enhance our market position as a community bank where decisions are made locally and customers’ dollars are reinvested back into the communities we serve. Simply stated, Your Money. Smart Choice!” said Stuard.

This philosophy was clearly echoed by Fred Landiss, Senior VP and Director of Marketing for F&M Bank. “Our strength as a community bank has been in bringing the value of local decision making to the markets we serve. Our customers have a variety of up to date products and services available to them. Plus the value of dealing with people that they know, and that know and respect them. We also have a record of supporting leadership in many civic and professional organizations through our employees.” he said.

F&M Bank constantly invests in new training opportunities for their employees to empower them to better be able to take care of the needs of their customers. Their staff has a goal of making banking simple and understandable for their customers. To do this, they make every effort to show the customers how new technology can make their banking life safe and secure. “”The cellphone is revolutionizing the banking industry, by making it possible for people to enjoy the full services of their bank while on the go.” Landiss said, “We expect F&M Bank to be in the forefront of this technology as it evolves. Bricks and mortar branches will always be a foundation of the banking industry, but technology will make it possible for our customers to do business globally without having to come in to the bank.”

It is this type of vision is what will make F&M Bank continue to be number 1 in our community for a long time to come.

F&M Bank is a big supporter of Austin Peay State University, the Roxy Regional Theatre, a member of the local Chamber of Commerce, and the Aspire foundation; as well as many other charities and organization in the community.

“That’s one of the things that a community bank is known for. We want Clarksville to continue to grow and prosper, and by giving back to our community we enhance the quality of life for the citizens we serve,” Stuard continued, “A good example of this is during the holidays we collected over 1,000 toys in our Clarksville market for distribution to needy children in the community. Similar drives were simultaneously going on in the other communities we serve as well.

Comedy on the Cumberland

Founded in Bumpus Mills, Tennessee in 1906, the early history of Farmers & Merchants Bank gave little indication of the dynamic reputation the bank currently enjoys. Although it survived the Great Depression of the 1930s – unlike nearly 10,000 other U.S. banks – the roots of Farmers & Merchants remained planted in the small Stewart County community.

In 1972, John R. Wallace became president and CEO, turning the small docile bank into a financial, civic and community leader. After moving into neighboring Dover in 1988, the bank set sights on Clarksville as the most logical site for expansion. By 1989, Farmers & Merchants Bank opened in Montgomery County.

Expansion continued in Montgomery and Robertson County as the bank opened offices in Clarksville, Springfield and Greenbrier. In 1997, the bank targeted Wilson County and opened its ninth office in Lebanon.

In 1990, Sammy Stuard was named president and later assumed CEO duties. Wallace maintained his role as bank chairman. Together they realized that to continue its aggressive growth, the bank needed a more modern, progressive image. In 2002, they took the bold step to transform Farmers and Merchants into today’s F&M Bank. Research indicated the Farmers and Merchants name did not play well with younger demographics, and changing the name to F&M appeared to be a positive move with this market segment.