Clarksville, TN – On December 28th, 2010 a little after midnight, officers responded to a business on the 1900 Block of Madison Street in reference to a suspicious male standing out back by their utility shed.

When officers arrived, he had already fled from the area. But, within minutes another call came in about a man trying to get into a West Meadow Drive residence. Officers located the man, identified as Evan Oneill McWhorter, and spoke with him. 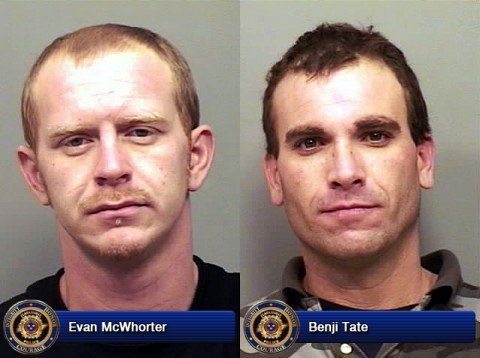 During a consent search, a payroll check made out to an employee from Gary Matthews was found in McWhorter’s possession. Sgt Odell, who was at the scene, recalled a vehicle burglary which took place on December 27th at Gary Matthews. After further investigation, the name on the check was found to be the same as the victim of the vehicle burglary.

Detective Duke interviewed McWhorter which lead him to believe that additional stolen property was at McWhorter’s residence at 817 Stafford Street. There was also supposed to be a man, Benji Dwaine Tate, at the residence that had outstanding warrants pending.

Officers found Tate at the residence and took him into custody. Tate asked Officer Jason Hankins to get his coat for him. Officer Hankins checked the coat before handing it to Tate and found the burglary victim’s Heritage Bank Visa card inside a pocket.

McWhorter is on Probation out of Illinois. Both McWhorter and Tate have lengthy local criminal histories.