Govenors’ home contest with Tennessee Tech, January 20th, to be televised by ESPNU

As a result of that announcement, the contest is being moved from a 7:30pm start to 6:00pm to accommodate television, with the women’s game that night between the two programs slated for an 8:15pm tipoff. That game originally was scheduled for 5:15pm. 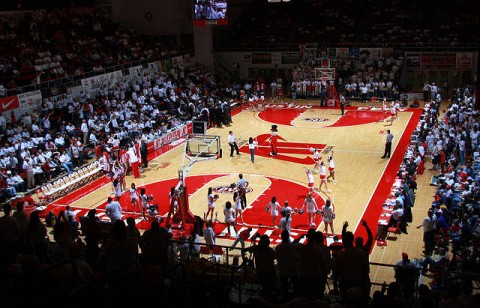 Wednesday’s announcement also means the Governors will appear three times on ESPNU in less than a two-week span. The Govs’ first appearance with be 11:00am, Saturday when APSU travels to Murray State. A week later, the Govs head to Tennessee State for a 3:00pm, January 15th contest in Nashville. Five days later it will be the Golden Eagles coming to Clarksville.

When the OVC announced its ESPN basketball schedule on October 7th, two dates on the schedule were designated as “wild cards,” where the game to be aired was not selected until 21 days before the contest, making sure an attractive matchup was televised, instead of having to determine the full schedule a month before the season began.

Entering this weekend’s games, Austin Peay (10-6, 4-0 OVC) is atop the OVC standings while Tennessee Tech (6-6, 2-1) also has a winning record in conference play. Last season the two rivals split the regular season series, including an overtime decision, and played a back-and-forth affair in the OVC tourney first round that ended with Tennessee Tech winning on a last-second three pointer.

The APSU-Tennessee Tech game is the second men’s game in as many days that has been moved to a 6:00pm start.  Monday’s APSU-UT Martin game also will start at 6:00pm from Skyhawk Arena.

The other “wild card” date on the OVC’s ESPN schedule is Thursday, February 3rd; an announcement on which game is selected for that date will be made later this month.