Nashville, TN – The Tennessee Department of Safety promoted 13 individuals at the THP Training Center located at 283 Stewarts Ferry Pike in Nashville. The event marked the first promotion ceremony of the year and the last for outgoing Commissioner Dave Mitchell, who was presented with memorabilia from the Department. 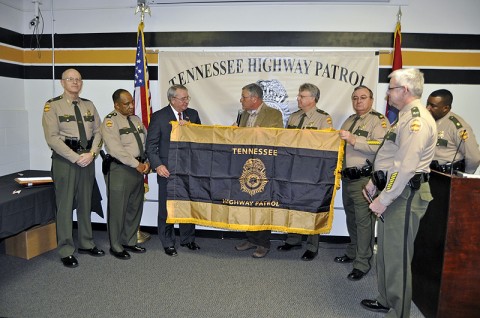 Gregory Ragan has been named the Administrative Lieutenant over the Lawrenceburg District. Lieutenant Ragan began his career with the Highway Patrol in March of 1998, where he was first assigned as a Road Trooper in Shelby County. After two years in Shelby County, Ragan was transferred to the Lawrenceburg District and patrolled the roads for six years until his sergeant promotion in September of 2006. His first stint as sergeant was the midnight shift, then as a Road Sergeant in Lawrence County. In October of 2008, he was awarded the Administrative Sergeant position until his most recent promotion. Originally from Collinwood, Tennessee, Ragan currently resides in Loretto with his wife, Jill, and children, Kyla, Madison and Connor.

Michael Melhorn has earned the rank of Lieutenant of Troop C (Anderson, Campbell, Scott) in the Knox District. Joining the THP in 1994, Lieutenant Melhorn has served 16 years in Roane County. He has worked as a crash reconstructionist, a K-9 handler and was promoted to Sergeant of Troop B in January of 2004. Included in his list of accomplishments is a Medal of Valor honor from the Knox County Sheriff’s Department in 2004. Lieutenant Melhorn was also assigned to security detail for the Governor within the Knoxville District. He is also a proud graduate of the 2008 FBI National Academy in Quantico, VA.

A former Sergeant in the THP Training Center, Jerry D. Rush has earned the rank of Lieutenant over Commercial Vehicle Enforcement (CVE) administration in Nashville’s District 9. Commissioned as a State Trooper in 1988, Rush has worked in Sumner, Davidson, and Wilson counties, as well as the Robertson County Scales. Rush also supported the THP Training Center staff through 10 Trooper Cadet Schools from 1998 until 2010. He resides in Hendersonville, Tennessee.

William T. Spivy, Jr. has been promoted to Sergeant in the Lawrenceburg District. After joining the THP in January of 2002, Sergeant Spivy worked in Lincoln County for six years. He was later transferred to Marshall County, where he continues to work today. Sergeant Spivy also serves on the Interdiction Plus team and is a former member of the District 7 Strike Team. The Lewisburg, Tennessee, native has also completed four phases of Desert Snow training. He is married with one child.

Wayne Dunkleman, an eight-year veteran with the Tennessee Highway Patrol, has been promoted to Sergeant in District 7. Dunkleman boasts an array of experiences, including Commercial Vehicle Enforcement in the Chattanooga District, road patrol in Marshall County, Interdiction Team Leader in the Lawrenceburg District, a K-9 handler and Drug Recognition Expert. Originally from Little Valley, New York, Dunkleman currently resides in Cornersville, Tennessee, with his wife and two children.

William G. Butler, II, has earned the rank of Sergeant in Lauderdale County of the Memphis District. Since becoming a State Trooper in January of 2002, Butler has worked the roads in both Obion and Lauderdale Counties. He has garnered certification as a Drug Recognition Expert, a Field Training Officer and S.T.O.P.S. Instructor, and served on the Memphis District Strike Team. Highlighting his Strike Team experience included an assignment to assist in the 2009 Presidential Inauguration Detail, where he received the Colonel’s Unit Citation Award. Butler currently lives in Ridgely, Tennessee. 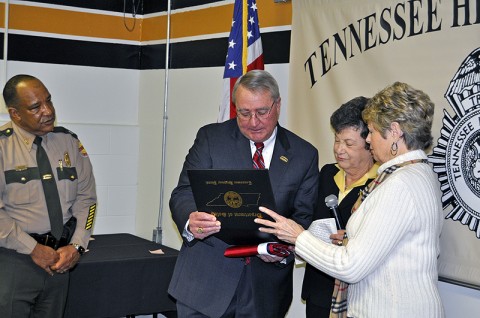 Barry Whitten has been elevated to Special Programs Sergeant in THP’s Jackson District. After starting his career with the Commercial Vehicle Enforcement Division of the Department of Safety, Whitten went on to train and graduate from Trooper Cadet School. Upon graduation, he served a six-year term in the Memphis District, including duties in Shelby, Haywood and Hardeman Counties. During this time, Whitten also became a Field Training Officer, where he produced six new State Troopers for the Tennessee Highway Patrol. In 2009, Whitten was transferred to the Jackson District Special Programs unit as a Motorcoach Inspector and later served as a Pupil Transportation Inspector. Whitten has received certification to conduct all levels of Commercial Vehicle inspections. He originally hails from Selmer, Tennessee, but currently resides in McNairy County.

Entering his 14th year with the THP, Shannon Brinkley has been promoted to Sergeant in the Research, Planning and Development (RPD) division. Brinkley joined the state of Tennessee as a Capitol Police Officer in June of 1994. Soon after, he attended THP Trooper Cadet School and graduated with Class 296 in December of 1996. Brinkley was stationed as a Road Trooper for Trousdale and Macon counties in the Cookeville District for his first assignment, and later transferred to Smith County in 1998. Brinkley has served stints with the THP Criminal Investigation Division (CID) and acted as a Task Force Officer with the Drug Enforcement Administration (DEA) in Nashville. Brinkley has experience as a Field Training Officer, a K-9 handler, Criminal Interdiction, and Dignitary Protection. Brinkley and his wife and two children live in Carthage, Tennessee.

Jason Lowe has been promoted to a THP Sergeant in the Fall Branch District. A former United States Marine and Knoxville Police Department Cadet, Lowe joined the Department of Safety as a Commercial Vehicle Enforcement (CVE) Trooper in 1997. Since then, he has become a K-9 handler, a Field Training Officer and earned Officer of the Year accolades in 2001. Lowe has also received training as a Radar Instructor, S.T.O.P.S Instructor and D.W.I. Instructor, as well as training in Hazardous Material.  He, along with wife, Amanda, and children Collin, Catelyn and Savannah, live in Dandridge, Tennessee.

Brian Boshears has been promoted to Sergeant in the Knoxville District. A 23-year veteran of the THP, Boshears began his career in Rutherford County, before he was transferred to Scott County in November of 1989. He has served as a member of the THP Critical Incident Response Team (C.I.R.T.) and with the Highway Patrol’s Chaplains program and Stress Debriefing team. Boshears is also an Advanced Traffic Reconstructionist and Radar Instructor. A 2003 graduate of Northwestern University’s School of Police Staff and Command, Boshears and wife, Jessica, reside in Oneida, Tennessee. They have five children.

Steve Sakarapanee has been promoted to Sergeant in the THP Training Center in Nashville. Sakarapanee joined the Highway Patrol in 1998 and was initially assigned as a Road Trooper in Robertson County. In 2001, he worked the roads in Davidson County, before transferring to the Training Center two years later. Sakarapanee received certification from Northwestern University’s School of Police Staff and Command in 2002. He is also a certified Police Motorcycle Instructor. He resides in Davidson County.

Randall Martin has been promoted to Sergeant for Special Programs in THP’s Knoxville District. Commissioned as a State Trooper in 1998, Martin’s first assignment was in Claiborne County in the Fall Branch District. After serving four years there, he transferred to work in Union and Knox Counties and remained there for six years. In September of 2007, Martin joined the newly created Evidence Custodian position for the Knoxville District, where he has served until his promotion. Martin resides in Knox County with his wife, Robin, and two children.

Penny Roser was promoted to Communication Supervisor for Shelby County in THP District 4. She began as a Communication Dispatcher in September of 2002 and earned the Dispatcher of the Year award in 2008, highlighting her eight-year career with the department. Roser has served as the Terminal Agency Coordinator for the Memphis District and as a Certified Training Officer for new dispatchers. The Scotts Hill, Tenn., native is married to Michael Roser. They have two daughters.

The Tennessee Department of Safety’s mission is (www.tn.gov/safety [1]) to ensure the safety and general welfare of the public. The department encompasses the Tennessee Highway Patrol, Office of Homeland Security and Driver License Services. General areas of responsibility include law enforcement, safety education, motorist services and terrorism prevention.