The Rakkasans also ceremoniously cased their colors in preparation of their trip back to their home base in Fort Campbell, KY, while the 3rd BCT, 1st Inf. Div. of TF Duke from Fort Knox, KY, uncased their own. 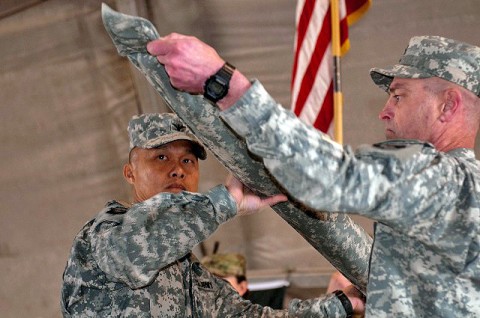 The ceremony was attended by Duke and Rakkasan Soldiers; Brig. Gen. Stephen Townsend, deputy commanding general of Combined Joint Task Force – 101; Abdul Jabbar Naeemi, Khowst governor; and several members of the Afghan National Security Forces. It was a great medley of backgrounds, ethnicities and even uniform styles, as the outgoing Rakkasans wore the Army combat uniform, while the Duke Soldiers wore the newer multi-cam uniform.

“The hard work, the sacrifice, the blood of the ANSF and coalition partners have helped meet the conditions for stability in the region,” said Naeemi, “and the enemy forces can no longer move freely.” 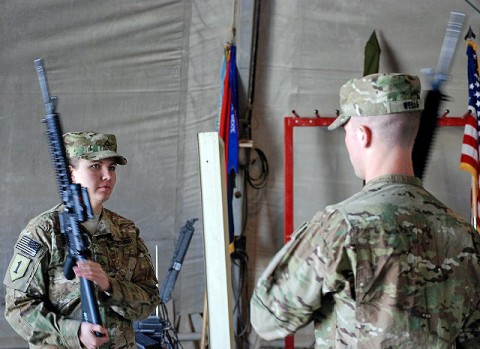 “During the early moments of this rotation the Taliban was winning in our provinces,” he said. “But this summer, our combined actions started to produce remarkable results. We began to take many enemies out of the fight. The security conditions improved, and we began turning the tide against the Taliban.”

Speaking in both English and Pashto, U.S. Army Col. Christopher Toner, commander of TF Duke and Topeka, KS, native, thanked the Rakkasans for their service and sacrifices and pledged his assistance to the ANSF. 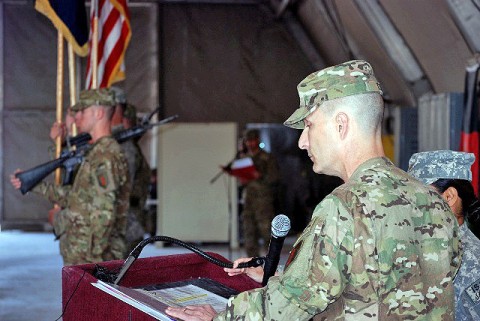 “Our brothers in the ANSF, we embrace you with a spirit of mutual respect and cooperation,” he said. “We are here now to continue the support the Rakkasans have given you over the past 12 months.”

As the ceremony drew to a close, Toner promised that he and his Soldiers would help the Afghan people in their fight for their country.

“The Soldiers of the Duke Brigade are committed to using everything in their power to build Afghan capacity for providing security and stability to the region,” he said.