Nashville, TN – For the third consecutive season, Austin Peay women’s basketball team will meet Eastern Illinois in the Ohio Valley Conference Women’s Basketball Championship. The 2011 tournament edition will pit the two teams against one another in a noon, Thursday, quarterfinal contest at Municipal Auditorium.

Fifth-seeded Austin Peay advanced to the quarterfinal round with a 71-64 first-round victory against eighth-seeded Murray State. Fourth-seeded Eastern Illinois received an first-round bye and will be playing its first tournament contest. 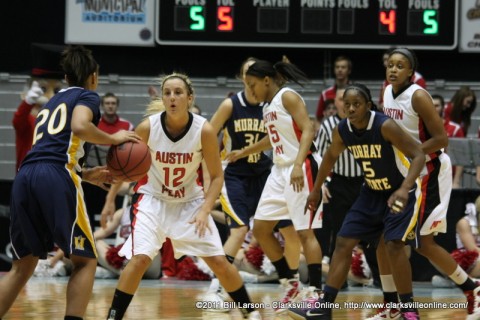 These two teams are not strangers, with Wednesday’s contest the third time the two have met in the OVC Tournament. The previous two meetings occurred in the tournament’s championship game and both times Austin Peay emerged victorious in a closely-fought affair. The 2009 meeting required two overtimes to settle with the Lady Govs posting a 69-65 victory. Last season’s faceoff did not require overtime but did go to the wire with Austin Peay scoring a 69-60 win. 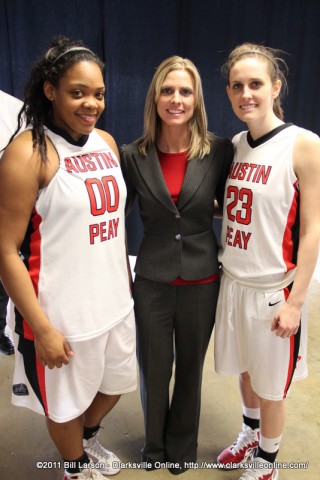 With Wednesday’s first-round victory, Austin Peay has won seven of its last eight games. The lone loss in that span was last Thursday’s loss to Eastern Illinois that determined the recipient of the tournament’s fourth seed. Since February’s start the Lady Govs have had six players average seven or more points a game. Senior Brooke Faulkner, who scored a career-high 20 points in the first-round win, is averaging 13.0 points per game in the last eight games.

Eastern Illinois brings a nine-game win streak – the 11th longest in Division I currently – into Thursday’s contest. The Panthers have not lost since a January 27th contest against league-champion Tennessee Tech. Eastern Illinois is led by first-team All-OVC selection Ta’Kenya Nixon who is averaging 15.7 points, 6.7 rebounds and 5.0 assists per game.

Lady Govs In The OVC Championship

Austin Peay is 9-5 against teams in the tournament field. In its half of the bracket, the Lady Govs swept No. 8 Murray State, were swept by No. 4 Eastern Illinois and split with No. 1 Tennessee Tech.

The Lady Govs are 6-2 all-time in OVC Tournament games played at Nashville’s Municipal Auditorium and won the 1996 and 2004 titles there.

The Lady Govs have won seven tournament titles, including six of the last 10 tournament championships.

Austin Peay has won the last two tournament titles. In 2009 it was the first No. 5 seed to win the tournament, defeating the fourth, first and second seeds. Last season, the Lady Govs won as the No. 3 seed, downing the sixth, second and first seeds.