Clarksville, TN – Wednesday afternoon, Cynthia Sueiro of G’s Pancake House made a $1,625 donation to Big Brothers Big Sisters.  The money was raised during the recent Triple Nickle Pancake Challenge Throwdown held at the Riverside G’s Pancake House last month where four competitors  attempted to be the first to set the record.

Each contestant had five 16 inch pancakes, five strips of  bacon and five scrambled eggs totaling 10 lbs.  The goal was to be the last one with the least amount left on their plate in just one hour.

The four contestants include  Matthew Milano,  Joshua Morrison, Janeé Vaughn &  Jonathon Clemens who was declaired the winner in the first ever Triple Nickle Pancake Challenge Throwdown. There were lots of prizes including a Blu-Ray DVD player, $100.00 cash, Freedom Deli gift cards and a gift certificate from the SSF Submission Academy for FREE training.  Jobathon Clemens will be the first to have his photo posted to the G’s Wall of Fame. Everyone recieved a medal for their partisipation in the event.

Word is there will be another Triple Nickle Pancake Challenge Throwdown coming to the Riverside Drive location in May. Be sure to watch for details of this event. In the mean time the challenge is out. If you go into any of G’s Pancake House  locations and order the Triple Nicle Challenge and finnish everything on your plate, it’s FREE and you get your photo on the G’s Wall of Fame. 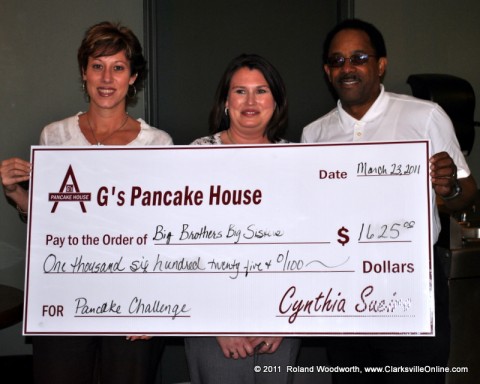 Roland Woodworthhttp://www.ClarksvilleHomeInformation.com
My name is Roland Woodworth, a professional REALTOR® with the experience & knowledge to assist you with all your real estate needs. My main area of focus is Clarksville TN , Oak Grove KY and the surrounding areas. I have over 12 years experience in the Real Estate industry and I’m a full time Realtor licensed in both Tennessee and Kentucky. I’m also a NAR Certified Short Sale & Foreclosure Resource. I moved to Clarksville while stationed in the US Army at Ft Campbell, KY in 1992. I have been in sales in the area since 1996. I received my Real Estate license in 1999.   I have been involved in many community organizations including the Clarksville Area Chamber of Commerce where I was a Chamber Ambassador for 5 years. I was the Fair Chairman for the 2002 North Tennessee State Fair in Clarksville, TN, and also president of Fair Inc which is the governing board consisting of members of the Clarksville Jaycees, City of Clarksville and Montgomery County. I’m  also a member of the Clarksville Jaycees Volunteer Col. Corp. a past member of the Clarksville Jaycees and the Downtown Kiwanis Club. I participated in the 2005 and 2009 Clarksville Extreme Makeover Home Edition builds here in Clarksville - Montgomery County.
RELATED ARTICLES
Events