Kunar Province, Afghanistan – “I can say that I’ve led this platoon into more ambushes than any other point man here on this deployment,” said U.S. Army Sgt. Nathaniel S. Gray with a toothy grin and slow, southern accent.

“I was point man for the first six, seven months here,” he continued. “I walked us into a lot. I can smell it, but I don’t know where it’s at. I know it’s going to happen. Every time we were walking I was looking for my next covered and concealed position. Ya know, I’d look at this rock, then that rock. Oh, there’s another rock, that’s where I’m going. I just never knew when it was going to happen.”

Gray, assigned to Company B, 1st Battalion, 327th Infantry Regiment, Task Force No Slack, is now a squad leader and has an uncanny knack for getting himself and his team out of tight spots.

Even before joining the Army, Gray found ways out of potentially hairy situations.

He grew up in Tupelo, MS, a town about the same size as Asadabad, the capital of Kunar Province, Afghanistan, where he now patrols.

As a teenager, he watched war movies and idolized the men in those action roles who wore Screaming Eagle patches on their shoulders.

After returning from his first combat tour in Iraq, he quickly joined the 101st Airborne Division and deployed again to Iraq with 3rd Brigade Combat Team for 15 months.

Now, 10 months into a yearlong deployment to Afghanistan with 1st Brigade Combat Team, Gray stares out of his makeshift fighting position into the Shigal Valley.

“Make sure you know where it’s coming from before you shoot, know what I mean?,” said Gray to the Soldier. “I expect a rocket-propelled grenade to come from that ridgeline over there.”

It was quiet for a few minutes as the Soldiers scanned the ridges with their weapons.

“Last time I was home, one of them was walking around the gas station we were at singing the Pledge of Allegiance,” Gray said. “I thought that was pretty cool.”

One of the main reasons Gray has stayed in the Army is because of his two sons. He is able to care for them, but they also look up to and admire him for being a Soldier.

“They want camouflage stuff, ya know they’re 5,” Gray said with a smile. “They want the G.I. Joe backpack, and I think that’s pretty cool.”

Then he explained the difference between being a squad leader and a father.

“Over here, a squad leader is more difficult than taking care of kids,” Gray explained. “Here, you have to check to make sure their magazines are full, their (combat optics) are tied down, you have to check everything. Small things have bigger consequences over here.” 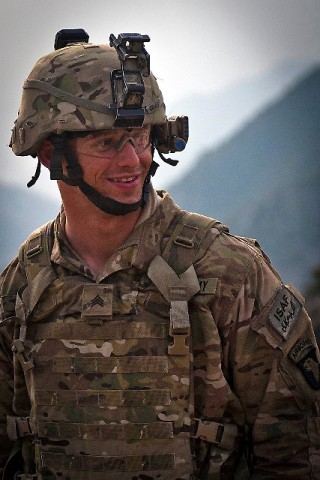 Since joining the Army, Gray has learned that it’s the little things that count.

“The Army changed my life a lot,” Gray said. “It kind of distilled something in me. I started doing the right thing. I respect myself more and I respect others more.”

After dodging as many more ambushes as he can in his three years left in the military, he plans on going to college and walking into one more ambush: being swarmed by children.

“I want to be a kindergarten teacher,” Gray said.

The fighting position on the mountain was quiet for a moment, and then erupted with muffled laughter from his troops.

“Everybody laughs, but that’s what I want to do,” added Gray. “I love kids.”

A few days later, back home in Mississippi, Jacob and Joseph got a phone call. Their dad was on the line, far away from them but reassuring them that he found a safe route off the mountain. Gray has a certain knack for that.