Austin Peay (10-12, 1-1 OVC) is still seeking to bounce out of its recent doldrums where it has won just three times in its last 12 games, including a 9-6 loss to Middle Tennessee, Wednesday, to open the current five-game homestand. The Govs offense has suffered during that stretch, averaging 3.3 runs per game and posting a .215 batting average. Meanwhile, APSU’s pitching staff continues to hold steady with a 5.51 ERA and the defense has maintained a .970 fielding percentage (13 errors).

Only two Govs have double-digit hit totals during the recent 12-game stretch. Freshman outfielder Rolando Gautier has 13 hits and is batting a team-best .325  with five RBI. Sophomore shortstop Reed Harper has 10 hits but is batting just .213 with one RBI in the last 12 games. Senior third baseman Greg Bachman had nine hits and a team-best seven RBI.

On the mound, Austin Peay will turn to its trio of left handers for the fourth consecutive week. Game one starter junior Jeremy Dobbs (5-0) will seek to continue his winning streak that reached five games after a victory in the OVC opener at Murray State, last Sunday. On the other hand, senior Jack Snodgrass (0-3) will look to end his three-game losing streak that was extended by a loss in game two of the Murray State series.  Junior Zach Toney (1-2) will start the Sunday series finale after picking up some midweek work against Middle Tennessee.

Eastern Illinois (6-16, 2-1 OVC) brings a two-game losing streak to Clarksville, dropping both its midweek contests – 7-2 to Saint Louis and 5-2 at Indiana State. However, the Panthers sit tied atop the league standings after opening OVC play by winning two of three against Eastern Kentucky in Charleston last weekend.

The Panthers will turn to junior right-hander Mike Hoekstra (2-2) to start the weekend series after allowing six runs and striking out nine in the OVC opener last weekend. Freshman Luke Bushur (2-2) will revise his Game 2 starting role, after picking up the win in game two of the series last weekend, allowing one run and striking out seven over 5.1 innings. Freshman Christian Slazinik (1-4) will start the series finale for his seventh start this season, but first in OVC play. 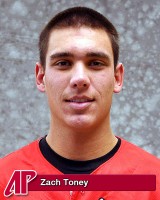 Austin Peay and Eastern Illinois have met 50 times previously, with the teams splitting the series 25-25, including an even 19-19 split of their OVC meetings.  The Govs lost last season’s series with the Panthers in Charleston, Ill., dropping both ends of the Saturday doubleheader, 2-0 and 3-4, before rallying to win the finale, 18-6. It will be the first time the two teams have met in Clarksville since the 2007 season – a three-game series APSU swept – as the 2009 series was wiped out due to rain.

Notes From The Week

Austin Peay surrendered a pair of leads before falling to Middle Tennessee, 9-6, Wednesday… The Govs offense had just four hits and failed to take advantage of nine walks issued by Blue Raiders pitching. Freshman outfielder Rolando Gautier reached base safely for the 21st consecutive game after being intentionally walked in his first plate appearance as a pinch hitter.

Austin Peay closes out its current five-game homestand when it hosts Evansville in a Tuesday contest. The Govs then travel to Middle Tennessee for its only road trip of the current 11-game span, finishing the home-and-home series. The Govs and Purple Aces have met every season since the 1985 campaign with Evansville owning a 34-20-2 edge in the series. APSU snapped a UE four-game win streak with a victory in Evansville last season. Wednesday’s meeting at MTSU will be the 195th meeting all-time between the two teams.