After dropping the first set in match controlled by her opponent, Weikard adapted for the second set and found a way to win. Much like the OVC Tournament final, last season, Weikard battled in the deciding match. She would defeat Murray State’s Ashley Canty to help the Lady Govs move closer to this season’s conference tournament.

“Carolin’s match was a lot like the conference final, last year,” head coach Malik Tabet said. “The first set was slow, (Canty) set the pace and Carolin couldn’t get anything going. Carolin made some adjustments and took it over for the last two sets. It wasn’t pretty, but sometimes you have to play the strategy that’s going to win.”

The Lady Govs won the other three singles matches, each in straight sets. Junior Vanja Tomic won her second-straight match at No. 1 and freshman Andra Cornea won a close No. 4 match (7-6, 8-6). Freshman Kimberly Loo won a convincing match at No. 5. The four singles win came after the Lady Govs dropped a brutal doubles point, losing both matches.

“That was probably the worst doubles we’ve played all year,” Tabet said. “We came out really flat, with no energy. When singles start, it was like we flipped a switch.” 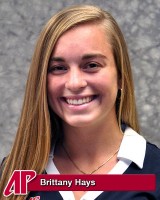 Now with only one match left to play, the Lady Govs reign as OVC Champions is almost in the rearview mirror. Austin Peay hosts Jacksonville State, 2:00pm, Friday for Senior Day. Tabet will honor the only senior, Brittany Hays, as the Lady Govs prepare for another OVC tournament run.

“It seems like the season has went so fast,” Tabet said. “The good thing is, there are a lot of teams with similar records. It’s all going to come down to the last weekend to set the tournament field. We feel like our losses were so close at 4-3 both times, that we could very easily be undefeated. We have to get everyone playing well at the same time and we’ve got a good chance.”