In fact, all three signees also will add size and speed to an area that lost a trio (Adrian Mines, T.C. Jennings and Darryl Miller) of experienced senior receivers. They are 6-3, 190-pound Hunter Branch, of Fairview; Anthony Woodard, a  6-5, 190-pound receiver from Gallatin, and Darryl Clack, a 6-6, 210-pound wideout from Maplewood. 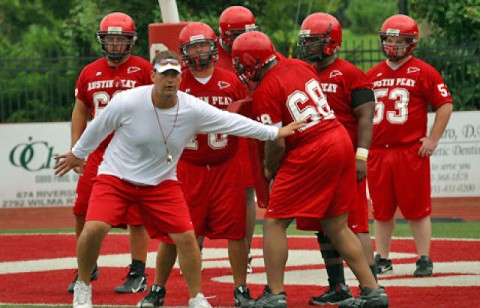 The most recent signings now brings to 19 players the Governors have signed for 2011.

“We had them on our board and felt like we needed to add some quality depth at wide receiver,” APSU coach Rick Christophel said.  “Two of the three were in our summer camp—I think Hunter Branch was MVP. All three have good size and speed. They are very good athletes, multi-sport athletes.

“It gives us five receivers (Jamaar Embry and Tremond Robinson being the others) in this class. We will probably try to redshirt a couple if we can.”

Caught 33 passes for 576 yards and and 5 TDs as senior…credited with 49 tackles on defense…earned all-district…team co-captain…selected as National Football Foundation Charles W. Hawkins III High School Scholar-Athlete at Gallatin…also was all-district and all-region basketball player, averaging 12 points, 12 rebounds and 5 blocks per game…named county Player of the Year and district Defensive Player of the Year.