Oak Grove, KY – On Monday April 5th, the tenant of this home on Desota Lane was cooking in the kitchen when she decided to go to the other  room for a moment and when she returned, the kitchen was in flames and within minutes the house was fully engulfed in flames. 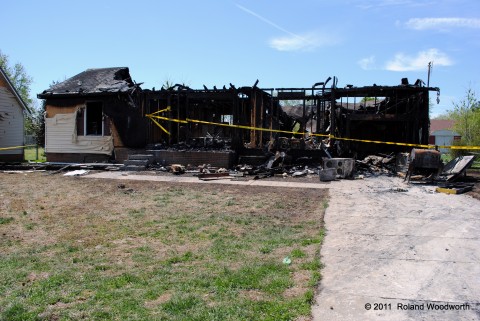 The Oak Grove Volunteer Fire Department requested back up from surrounding Fire Departments including Fort Campbell, Penbroke and Herndon to help put out the fire. Flames were so intense that it melted the siding off the homes located to the left and the right and there were concerns they to may catch fire. Reports indicate there were no one was injured in conjuntion with the fire. The occupants were able to salvage a few items from the home, while most everything was lost in the fire.

The fire that was reported at approx. 6:45pm may have started in the kitchen.  Assistant Fire Chief Lonnie Forst said flames quickly took over the home shooting through the roof and out the front door. A propane take may have exploded in the garage from a Bar-B-Que grill once the fire spread. Firefighters cleard the scene at 10:20pm.  It’s likely this home will be considered a total loss once the Insurance company arrives to evaluate the scene.