Clarksville, TN – A Fort Campbell man was charged by Detective Eric Ewing for his role in a Home Invasion which took place at 333 Southern Drive.

Detective Ewing’s investigation revealed that on April 14th, 2011 around 2:12am, the door was kicked in at 333 Southern Drive by three men brandishing guns. The entry was made while seven people, ages 2 (female),4 (male), 7 (male), 9 (male) , 12 (female), 19(male), and 28 (female) were asleep inside of the residence.  When the door was kicked in an announcement was made that it was the Clarksville Police Department. 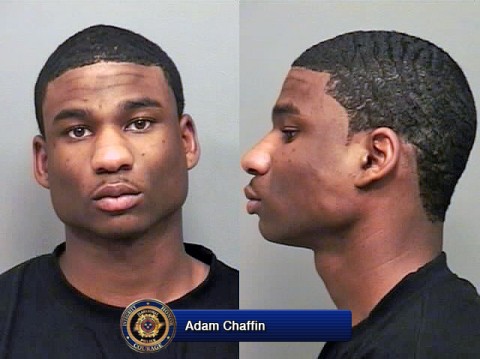 Two of the victims raised their hands trying to comply before they realized that it was not Police. At one point, a gunman struck a woman’s head repeatedly with a firearm while demanding money, then yanked her four year old male child out of the bed by the arm, held onto him, and placed a pistol against his head. He then threatened to kill the child if he wasn’t given the money. When the gunmen received some property, they fled from the scene.

Detective Ewing was able to confirm the identity of one of the gunmen, Adam Timothy Chaffin, since he had been to the residence several times before and the covering over his face slipped down during the course of the robbery.

The investigation is ongoing and additional charges are expected.  The lead investigator is Detective Eric Ewing, 931-648-0656, ext 1007.