HomeCommentaryWhen you want to communicate
Commentary

When you want to communicate 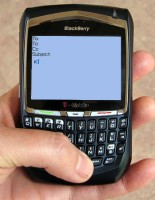 Remember back in the day when you got your gas card bill and it was buried amongst other stuff? There would be an envelope filled with inserts, coupons, promotions, and ads. You flipped through all that clutter and found the one small page that was your gas bill. That’s all you were really interested in.

The electronic age has done away with that. Sort of. Perhaps. Well, not really. There are now all the banner ads and pop up ads primarily on publication websites as they try to find a new revenue stream. For the most part, there is not much we can do about those.

But there is the extraneous stuff we force on each other. Some things that worked well or were at least tolerable on desktop computers really don’t work on Smart phone or hand held devices. The memo page email background, the clouds, the birds or whatever was used to dress up an email usually wasn’t too bad on a laptop. But, those add-ons become bothersome on a Smart phone.

Many well-intended folks attempt to promote their business or add an additional marketing effort along with an email. The communication principle of the gas bill is still the same. All the receiver really wants is the intended message even though I’m sure all those bill stuffers got some results or the big guys would not have used them for so long.

I encountered an extreme example last week in an email response. I had emailed a question to a friend/business associate. His response hit my Blackberry a few hours later. The response had three attachments and a ton of detail. (I have to admit that I have every conceivable way to contact me on my email signature block. Perhaps I need to evaluate that.) Along with all the logos, slogans, marketing campaigns and other data was my friend’s email response. It was not a single sentence response. It was not even a single word response. It was a single character – K. It communicated. He adequately answered my question. But, the appropriate brevity of his response highlighted the chaff that floated along with it. There are times when we just need to cut the crap and say what needs to be said.