Clarksville, TN – On May 6th, 2011, around 9:45am, two burglars got a surprise after they kicked in the door of a Kim Drive residence.  The homeowner had a handgun and fired at the two burglars after they entered her house.

A 27 year old female was home alone and heard the doorbell ring, accompanied shortly thereafter by a loud bang at the front door. After she heard the loud bang, the woman grabbed her 40 caliber handgun, made her way toward the front door, and yelled “I’ve got a gun”. 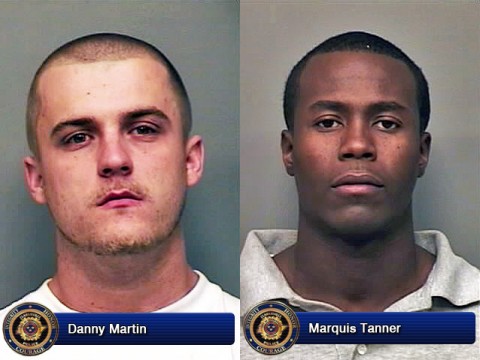 As she approached the front door, she saw two men standing inside of her home. She fired one round toward the men, but did not hit either of them. The burglars quickly fled from the house and got into a 4 door Dodge Neon and left the scene. The woman called 911 and provided a vehicle and suspect description and partial tag information.

Officer Brad Crowe located and stopped the vehicle within two minutes in the area of Holiday Drive. The victim was able to positively identify the two men as the ones who entered her residence without permission. Both men were taken into custody.