Nashville, TN – The Nashville Sounds suffered their ninth consecutive defeat on Tuesday evening at Greer Stadium, falling 6-3 to the Fresno Grizzlies in the opener of a four-game series.

The Sounds (9-22) have posted only one victory in their last 15 contests, dating back to April 23rd.

Fresno took a 2-0 lead in the top of the second inning against Sounds starter Sam Narron. After Brad Eldred singled with one out, the 6-foot-6, 268-pounder proceeded to steal second, third, and home off the Narron in the inning, scoring the game’s first run as a part of a double steal with Terry Evans (who had walked). The Grizzlies doubled their lead to 2-0 when catcher Chris Stewart plated Evans on a hit-and-run single to left. 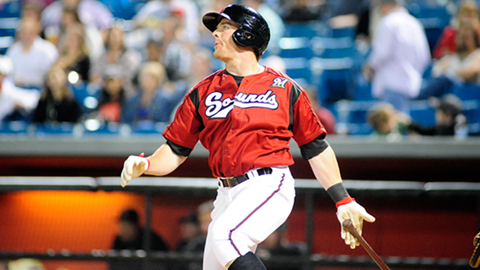 Fresno second baseman Brett Pill upped the visitors’ lead to 3-0 in the third with a solo homer off Narron that careened off the guitar-shaped scoreboard in left-center. The blast was the infielder’s team-leading fifth of the year.

The Grizzlies added a two-out run in the sixth when starting pitcher Matt Yourkin slapped a seeing-eye RBI single through the left side of the infield to bring home Eldred from second base. It was the second hit of the night for the Fresno hurler and chased Narron from the contest.

Yourkin (3-2) earned the win with a quality start for Fresno, working six innings of scoreless, three-hit ball. The southpaw walked one batter and struck out five in his 99-pitch effort.

The Sounds jumped onto the board in the bottom of the seventh inning, plating two runs against the Fresno bullpen.

Mat Gamel opened the frame by drawing a walk from Alex Hinshaw and moved to third on a one-out double by Taylor Green (2-for-4), who recorded his fourth consecutive two-hit effort. Shortstop Edwin Maysonet, who returned to action for the Sounds after missing nearly a month on the disabled list, followed with an RBI single to center that plated Gamel to put Nashville on the scoreboard.

Pinch-hitter Jeremy Reed drew a walk to load the bases and Fresno skipper Steve Decker summoned Waldis Joaquin from the bullpen to face Caleb Gindl, who drew a run-scoring walk to force home Green to draw the Sounds within 4-2 with the bases loaded and still just one out. The right-hander quickly recovered, inducing an inning-ending double play grounder from Eric Farris to escape the jam with the two-run lead intact.

Fresno got both runs back in the top of the eighth against Sounds reliever Sean Green. Stewart drew an inning-opening walk and moved to third on a Tyler Grisham bunt single combined with a Green throwing error. Edgar Gonzalez followed with a run-scoring groundout to second. Later in the frame, Conor Gillaspie (3-for-5) laced an opposite-field RBI double to left to drive in Grisham and increase the visitors’ advantage to 6-2.

Sounds left fielder Brendan Katin mashed his team-leading ninth home run of the year in the bottom of the eighth, launching a one-out solo shot off the guitar-shaped scoreboard in left-center against Joaquin to close out the evening’s scoring.

Veteran reliever Marc Kroon worked a scoreless ninth inning for Fresno to nail down his eighth save of the year.

Narron (0-1) took a loss in his first decision of the year for the Sounds. He allowed four runs on seven hits over 5 2/3 innings of work, walking four batters and striking out four.

Gamel continued his recent hot hitting, extending his season-best hitting streak to five games with a 2-for-2 effort.

The teams continue the series with an 11:05am contest on Wednesday morning, when thousands of area schoolchildren will pack the stands as a reward for meeting their educational goals in the popular Nashville Sounds Reading Club program. Right-hander Frankie De La Cruz (0-1, 3.19) will make the start for the Sounds and face Fresno right-hander Doug Mathis (0-1, 4.88).