Salt Lake City, UT – The Nashville Sounds lost to the Salt Lake Bees, 8-4, on Sunday afternoon at Spring Mobile Ballpark in the finale of a four-game set.

The loss halted a season-best four-game winning streak by the Sounds (17-25), who posted their first winning series on the road this season by taking the first three games of the series. 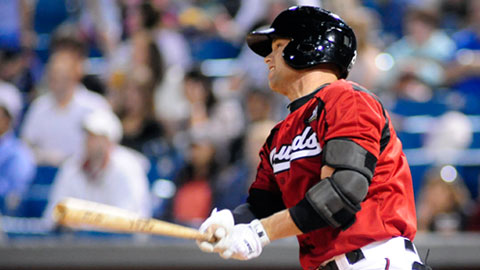 Out of the seventh hole in the Nashville lineup for only the third time this season, outfielder Brett Carroll went 4-for-4 with a double and two runs scored for the Sounds.

Carroll collected half of Nashville’s eight hits on the afternoon, while the first five hitters in the Nashville lineup went a combined 1-for-20. Caleb Gindl failed to reach base, snapping a 23-game streak, the longest such stretch by a Sound in 2011 and 3rd-longest active streak in the PCL.

Jeff Baisley spotted Salt Lake with a 1-0 lead in the bottom of the first inning with a two-out double off the center field wall.

The Sounds scored all four runs with no outs on Bees starting pitcher Bear Bay to go ahead 4-1 in the second inning. Mat Gamel began the rally by reaching base on a fielding error, followed by a single by catcher George Kottaras. Carroll cleared the bases with a hard-hit double down the left field line.

Shortstop Edwin Maysonet then came to the dish and hit a soft grounder on the first pitch to shortstop Gil Velasquez, who committed a throwing error that allowed Carroll to score and Maysonet to advance to second. In the ensuing at-bat, Taylor Green hammed an RBI base hit to right field to score Maysonet.

The Bees trimmed the Nashville lead to one run at 4-3 in the bottom of third inning. After Frankie De La Cruz issued an inning-opening Dwayne Bailey walk, Velazquez homered to left field, his second of the season.

De La Cruz cruised through the next three innings before getting into trouble in the bottom of the seventh. Salt Lake loaded the bases on De La Cruz, before the right-hander issued a base loaded walk to tie the contest at 4-4. The next batter Chris Pettit removed De La Cruz from the ballgame after tattooing the first pitch his saw over the left field wall. Giving Salt Lake the 8-4 lead, the homer was Pettit’s second of the season and Salt Lake’s second grand slam of the series.

Bear (2-2) settled down after giving up his four runs (two earned) all in the second inning. The right-hander walked none while striking out five in seven innings for the win.

Jim Henderson walked two in 2/3 of a scoreless inning in relief. In his Triple-A debut, Mike Fiers pitched a scoreless frame.